Priscilla “Sally” Kingsbury Frechette Maynard, W’41, spent her life building community. As the first woman named to the Dartmouth Board of Trustees, she shared her gift for connecting people at a critical time: the College’s transition to coeducation, a milestone Dartmouth is marking this year, the 40th anniversary of the change. 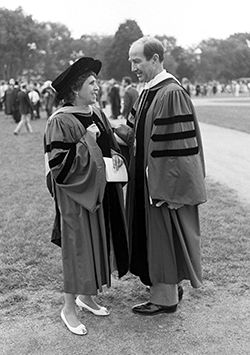 Sally Frechette Maynard, a champion of lifelong learning, an energetic contributor to life at Dartmouth, and a committed public servant, died February 6, 2013. She was 92.

She was elected to the Dartmouth Board in 1979 under then-Chairman David T. McLaughlin ’54, Tuck ’55, and served until 1989. The Board’s invitation followed the 1972 decision to admit women as undergraduates.

For many young women at Dartmouth in that era, Frechette Maynard was a symbol of their acceptance.

Philippa Guthrie ’82, a classmate of Frechette Maynard’s son Peter Frechette ’82, was inspired by the new Trustee.

“I can’t say enough about what it meant as a young female at Dartmouth during that time to see her join all those men on the board, and hold her own,” Guthrie says.

Ann Fritz Hackett ’76, the second woman and the first Dartmouth alumna to serve on the Board, recalls Frechette Maynard’s influence.

“Sally’s wisdom and warm, welcoming presence were among my most indelible memories when I first joined the Dartmouth Board in 1982,” Hackett says. “Sally paved the way for women on the Board. She brought a different, refreshing, and important perspective—and was humble, gracious, grounded, authentic, and positive. She saw possibility in everything.”

In a 1997 interview for the Dartmouth oral history project, Jane Carroll, who led the project then and is now a senior lecturer in art history, asked if Frechette Maynard had had any hesitancy in accepting the position.

“No. I couldn’t imagine not being brave enough to accept because it was such an absolutely wonderful opportunity. I certainly was nervous about it and just hoped that I could fulfill their expectations, but I couldn’t have turned it down.”

In 1979, Frechette Maynard already had strong board experience. She was elected to the board of education in Keene, N.H., her hometown, and served for nine years. She later became president of the New Hampshire School Board Association and took an active role in her family’s Kingsbury Machine Tool Corp. and with the Kingsbury Fund, the philanthropic offshoot of Kingsbury Machine Tool.

The New Hampshire School Board Association recognized Frechette Maynard with “the Distinguished Service Award” and, subsequently, the “Woman of the Year” award. In 1973, she was one of eight women in New Hampshire to receive the first annual “Women’s Service Award.” Three years later, the Greater Keene Chamber of Commerce named her “Keene Citizen of the Year.”

Frechette Maynard continued her own education throughout her life. After her first husband’s death, she went back to school, earning her MBA at the University of Massachusetts at Amherst.

“Education was always important to her,” Peter Frechette says. “In her early 60s, she went back to get her MBA. She was always taking courses, always learning, always trying to become a better writer.”

It was the first year at Dartmouth for her sons Peter and Edward when she was named to the Board. Peter Frechette says he did not realize at the time what a monumental shift her appointment represented.

“We got to Dartmouth and there were girls there and for us it was a coed school, but in retrospect I see how important that coeducational change was, and I see the importance of her becoming a Trustee and what that meant to the College,” he says.

Ed Frechette recalls his mother’s interest in and connection to the students of Dartmouth, outside of her work on the Board. When she was first elected, she led an outing for first-year students.

“I think she wanted to get to know members of the student community, and what better way than to lead a Freshman Trip,” he says. “My brother Peter and I took the trip with her, and she approached it so casually, like it was something she did every year. It spoke to how easily she could mingle with any group and have conversations at any level.”

Peter Frechette got a Facebook note from Derek Chow ’84, noting his mother’s passing.

“Peter, your mom led a freshman trip when I was a freshman. I met her at the Ravine lodge (and even did the Salty Dog Rag with her). It was my first impression of Dartmouth, and the beginning of my love affair with the school. I often credit her with introducing that shy, scared 18-year-old to that wonderful institution. You should know how much she meant to me, and Dartmouth. You can’t even imagine what a long-lasting impression it made. To me, your family was the very essence of Dartmouth and confirmed to me that I made the right decision to matriculate.”

Frechette Maynard had never met any of the Trustees when she joined the Board. In the 1997 oral history interview she recalls that she first became acquainted with other members of the Board at the Trustees’ annual summer retreat, held in those days at the Minary Center on Squam Lake in New Hampshire.

Then-Trustee E. John Rosenwald Jr. ’52 recalls that the Minary setting brought the Board together in a casual, family atmosphere, an ideal spot for getting to know the newest Trustee. Rosenwald says Frechette became a strong Trustee and a good friend.

“That was the beginning, and only the beginning, of a relationship that I treasure. A great Trustee, the first woman on the Board, full of wisdom, full of good cheer, high energy and with a love for Dartmouth that was palpable.”

Frechette Maynard served for 10 pivotal years encompassing the end of John Kemeny’s tenure and the election of presidents David T. McLaughlin and James O. Freedman. It was McLaughlin, as chair of the Trustees in 1979, who first reached out to her as a prospective Trustee.

Still, as the first woman on the Board, Frechette said in the 1997 interview that she was aware of the pitfalls of being seen as “the token woman,” a role she always rejected.

“I just felt that I could not speak for all women because not all women speak with the same voice,” Frechette Maynard said. “I certainly felt that I had been a woman all my life and that was the perspective that I brought,” she said, laughing. “There was always the caveat that I was speaking only for myself, but from the point of view as a woman.”

While still on the Dartmouth Board of Trustees, Frechette Maynard was asked to serve on the board of directors of New England College and went on to become chair of its board.

In 1986, she married Douglas Maynard, a former provost of Hunter College. With her husband retired and with most of her community service behind her, the two were able to devote their time to their favorite interests. First came their large combined family, followed by travel, bird watching, tennis, golf, and bridge.

A memorial service was held February 23 at the Unitarian Church in Peterborough, N.H.