While there has been much buzz surrounding the opening of the Black Family Visual Arts Center, there is also much to be excited about next door in the Hopkins Center, thanks to recent renovations. 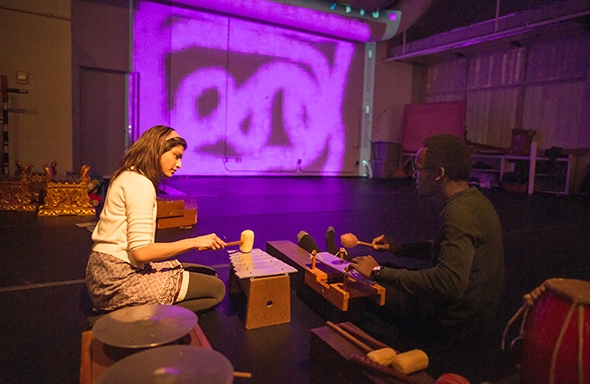 Since a number of classes and academic departments moved to the Visual Arts Center and vacated rooms in the Hop, there has been a chance to rethink and revitalize those spaces. Perhaps none of those spaces have been transformed like the “Creativity Laboratory,” which includes three large connected rooms opposite the Courtyard Café. Until last fall, the space was used as a drawing studio. With new drawing classrooms in the center, renovations have made the Hop space more versatile.

Several walls and smaller rooms have been removed to open up the space. A softer, spongy floor has been installed to accommodate dancers and performers. The room, which has high ceilings and large skylights, eventually will be able to be completely darkened so students can experiment with lighting.

This winter term, students in the co-curricular course “Creativity and Collaboration: An Exploration” have taken advantage of the reinvented classrooms. The course is taught by Professor Daniel Kotlowitz, Professor Ford Evans, and Senior Lecturer Jody Diamond, and draws on their expertise in theatrical design, movement, and sound, respectively.

“I’m not sure the course would have been possible without this space,” says Professor of Theater Daniel Kotlowitz. “It came at a really good time.”

The course seeks to teach creativity and collaboration, skills often required of students but rarely taught, Kotlowitz says. Because students are working with three different mediums, each with particular requirements, a class such as this previously would have taken place in three different classrooms prior to the renovation.

“The students are responding really well to it,” says Kotlowitz, chair of the theater department. “They’ve been fascinated by the idea of creativity and by the process of collaboration.”

Students in the class come from a variety of majors and interests. Among them are dancers, engineers, and musicians.

“From day one, the classroom has been a safe space for the exchange of creative ideas, and an incredible amount of trust has already built up,” says Sophia Archibald ’13.

“The balance of individual voice and collective co-creation lets me thrive in this class,” says Andrew Nalani ’16.

The class will combine the artistic elements for a final performance, which will be presented in class at the end of the term. Kotlowitz says he hopes the course changes the perception that only certain people are creative and that collaboration means compromise.

“We think that everybody has a creative gene,” says Kotlowitz. “We want students to be able to access and activate their creativity, and we want them to learn how collaboration can heighten and expand creativity.”

And what better place to activate that gene than the new Creativity Laboratory?