The Spirit of Adventure: The Shooter

Tyler Stableford ’96 is no stranger to air travel. One of today’s top adventure photographers, he makes a living flying around the world to shoot in its most extreme environments. Yet it was no commercial flight he took for an assignment in 2009, when he stepped into the backseat of an F16 fighter jet to capture Colorado’s Air National Guard pilots in action. “Right after takeoff we hit seven and a half G-forces. I almost blacked out,” he says. “I was trying to look through a camera viewfinder that I had no control over and it required a lot just to keep from getting motion sickness.” Stableford’s 90 minutes of loops and dives in the sky resulted in several award-winning photos, including a larger-than-life, upside-down self-portrait. 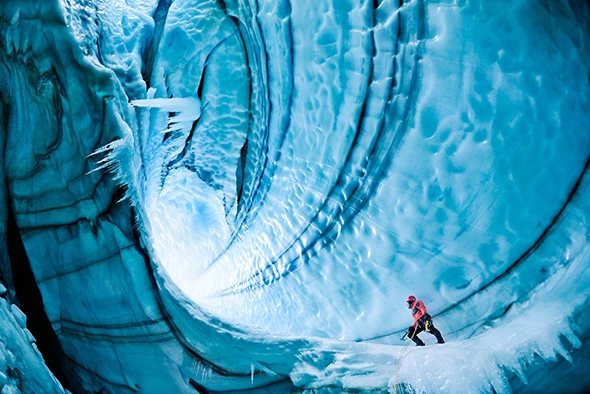 If the process were any easier, it wouldn’t be as much fun. “What I most enjoy doing as a photographer is trying to create good imagery in challenging situations,” he says. “I’m kind of a lifelong rock climber and for me, as a climber and also as a photographer, the point is to find a flow state and to find grace under pressure.”

Loving a challenge also explains his seamless shift to filmmaking in recent years. “The creation of images and particularly filmmaking itself is incredibly cerebral, and I find that really gratifying,” says Stableford. “It’s not just about taking six shots of somebody. There’s so much interviewing, scripting, and writing. It returns me to my roots as an English major and a storyteller.”