Dr. Jim Withers set out to create a classroom of the streets for his University of Pittsburgh medical students but discovered it was the street that was the teacher.

The founder of the Street Medicine Institute, a movement to bring health care to people living outside, in abandoned buildings and under bridges, senses a craving to hear the lessons of the men and women struggling to survive. Medical students like his friend Mengyi “Zed” Zha, Geisel ’16, crave a way to connect health care and social justice, Withers says. The two met three years ago as she was setting up a student-run free clinic in Beijing. 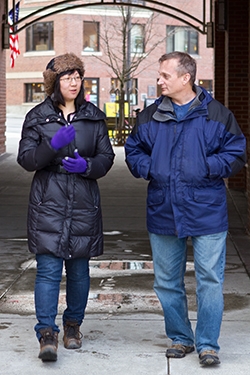 Mengyi “Zed” Zha, Geisel ’16, catches up with her friend and mentor Jim Withers on January 31. Withers visited campus to speak on his pioneering street medicine practice for “The Monstrous Octopus: The Tentacles of Poverty” conference. (Photo by Gavin Huang ’14)

“Zed and the students in the free clinic movement represent, I believe, students that are seeking—and even creating and demanding—medical education that works with the poor of their communities and incorporates that into the curriculum of medical schools. It’s one of the fundamental values of the Street Medicine Institute I represent, that street medicine should be part of every medical school in the world.”

Zha invited her friend and patron to Dartmouth to give the keynote address for “The Monstrous Octopus: The Tentacles of Poverty,” a three-day conference exploring poverty’s reach into health, business, and sub-cultures. The event was organized by the Geisel School of Medicine chapter of Physicians for Human Rights and co-sponsored by the Tuck School of Business’ Center for Business & Society, and the Nathan Smith Society of Dartmouth College.

Withers pitched his medical activism to some 175 Geisel medical students as well as Dartmouth undergraduates, graduate students, faculty, staff, and community members in the Life Sciences Center on February 1, flashing a PowerPoint slide covered with virtual push pins marking the hundreds of street medicine programs around the globe—in Moscow and Beijing, Alaska and Nigeria.

He presented his vision for a health care system centered on the needs of the person, not institutions, along with images and stories of the proud, desperate, unique men and women who became his patients and teachers on the streets of Pittsburgh.

“If you start looking at this from the point of view of the person, then things look really different and you get deep insight about what health is and why a giant machine we call ‘health care’ doesn’t necessarily work for the individual,” Withers says. “That’s the essence of person-centered care and I think that’s what students of the health care system and all of us who really care about our professions are seeking right now.”

Zha immediately thought of Withers as she, Anna Huh, Geisel ’15, Dartmouth co-chair of Physicians for Human Rights, and other members of the Geisel chapter planned this year’s symposium.

In 2010, Withers went to Beijing as Peking University Health Science Center student Zha and the other student organizers of the Sunshine and Love Free Clinic pulled together the National Medical Student Annual Summit with delegations from 10 medical schools in China.

The Sunshine and Love Free Clinic, the first student-run free health clinic in Asia, serves Beijing’s poor and dispossessed, a population that is exploding as China’s economy takes off, Zha says. There is a huge migration from rural areas. “As the cities expand, the government wants to take their land—and it can—so many farmers and families lost their land,” Zha says.

Zha came to Dartmouth after two years of medical school in Beijing and with credits from the University of Nebraska. She immediately connected with Huh and other Geisel students who see social justice as a vital part of their medical education.

Many Geisel students are involved in community service projects and have an interest in working with underserved communities. The Peking University Health Science Center students who are now running the Sunshine and Love Free Clinic joined the conference to talk about the work and to invite Geisel students to take part in an exchange.

The Dartmouth Center for Health Care Delivery Science, represented at another workshop, teleconferenced with the founders of Visionarios Peru. The NGO serves the people of Villa María del Triunfo, Peru, a slum community outside of Lima. A range of workshops, art installations, and media events explored issues surrounding poverty.

At the center of the movement, Withers says, is a return of medicine to its core value of care for the individual. “It is love—grace-based love,” he says.

It has sometimes been a challenge to bring the message to medical schools, but Withers sees a movement toward accountability to community.

“Not only is that the core spirit of what health care is—that I think they are trying to get back to in these confusing times of profit driven, legalistically controlled medical care—so it is like going back to the vision of why we have our place in society,” Withers says as he reconnects with Zha in a Hanover cafe the day before his address.

“But I think medical schools also recognize that their market is students. And students who are motivated to make this a deep, deep part of their personhood are more highly motivated, more dependable, and I think more intelligent, because they are wiser,” he says.

Huh says many hope for this work to become part of the program at Dartmouth.

“As Geisel’s curriculum redesign efforts develop, we hope for the incorporation of a significant social justice and human rights/ethics curriculum into the formal program,” Huh says. Whether that will happen is still unclear.

“What we do know is that there is a tremendous interest and need for medical students to learn about and discuss these issues and to have an active outlet where they can make a difference,” Huh says.

“This is evidenced not only by the outpouring of support and attendance of ‘A Monstrous Octopus,’ but also by the blooming of interest across the country as Dr. Withers described for a brand of medicine that is humane and that advocates for those who themselves do not have a voice.”

Learning from the street

In 1992, through Pittsburgh Mercy Health System, Withers started his work on the streets with the knowledge that this was a community he wanted to reach, but with no understanding of the lay of the land. He had worked with another hidden population, people facing domestic abuse, and he knew he needed a guide.

He connected with Mike Sallows, who had been homeless for seven years before getting off the streets. Sallows was a runner for homeless outreach and was bringing blankets and food to people living outside. He instructed Withers—first, not to dress like a doctor, and second, not to act like a jerk (although he used a saltier term). Withers tried to dress like someone living on the streets. He rubbed dirt and coffee grounds in his clothes and hair, he took the advice to keep his mouth shut so no one could see his teeth, and he watched.

On their first night out, Sallows, still skeptical, granted Withers a compliment. “Well, you’ve got the look.”

The arc of his work traveled through a very hard world populated by people who are “stubborn, ornery and who wouldn’t come to me on my terms,” Withers says.

He compares street medicine to a fire department or an ambulance service, filling in the gaps for the people who don’t fit into neat categories.

“In a way the street medicine model is forced to be what they are now calling a medical home—which is ironic,” he says.

The people who take the journey into street medicine “instinctively know that is what you would want if you were homeless.”

“You’d want health care that comes to you as you are, on your terms, accepts you, sees what you are doing well, acknowledges your strengths, and is committed to being with you no matter what.”

The key is creating a home care structure that is transferable across systems, Withers says. The street doctor can make sure the emergency-care resident understands what will happen when a homeless person is discharged, that physicians can reconnect with patients who have dropped out of sight, and that police, EMTs, bus drivers, and even drug pushers and pimps know there is a point of entry into the medical system for a homeless person.

He developed an electronic records system that identified patients by name, homeless camp moniker, tattoos, scars, or favorite haunts. It was some time before he realized his work was not medical outreach, but homeless community “in-reach,” he says. For his patients, he was becoming the guide in the jungle of the medical complex.

At Dartmouth, Zha, Huh and others are exploring this work.

“One part of my community service project sponsored by Geisel is characterizing homeless populations around the Upper Valley area,” Zha says. It is tricky work.

“I think homelessness is really different here than it is in a big city like Pittsburgh, like Beijing. Because this is such a small community, people are normally ashamed of meeting people that they know, they hide—they hide away.”

Withers capsulizes his advice with this quotation from the ancient Chinese philosopher Lao Tzu:

Go to the people. Live with them. Learn from them. Love them. Start with what they know. Build with what they have. But with the best leaders, when the work is done, the task accomplished, the people will say "We have done this ourselves.”