Keith Alexander was driving home after finishing his shift as a computer technician—one of three jobs the Caribbean immigrant held down—when he noticed a garage sale at a handsome house in White Plains, New York. Four years earlier he’d moved his family from Trinidad to the Bronx in New York City, and he was looking for something both “enriching and fun” for his eldest child. The wife of New York Mets ballplayer Tim Teufel owned the property, as it turned out, and she was eager to sell her son’s saxophone, which had rarely been used. Alexander paid $15 for the instrument and took it home to his 12-year-old son Stephon. 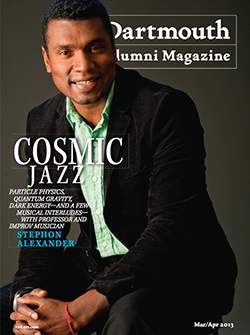 That “chance event” in 1984, recalls Stephon, the Ernest Everett Just 1907 Professor of Natural Sciences, sparked one of his two great passions: music. Now in the early days of his Dartmouth career, as Alexander pursues his research in theoretical cosmology—his second great passion—and plays gigs on tenor saxophone, an openness to improvisation lies at the heart of everything he does, including the new course he’s developed and a new album he’s working on.

“In music it’s important to practice and refine your technique. But when you get up to play you have to throw it all away,” says Alexander. Similarly, in physics research, “You learn the techniques, you master the math, but then there is a willful putting it all away,” he adds.