If one is nice, two is better. 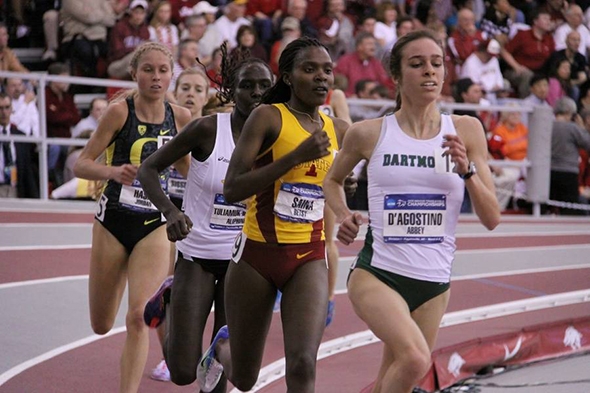 Abbey D’Agostino captured the national title in both the 3,000 meters and the 5,000 meters at the 2013 NCAA Division I Indoor Track and Field Championship. (Courtesy of LetsRun.com)

On Friday, March 8, D’Agostino won the 5,000 meters with a time of 15:28.11, a Dartmouth record and more than five seconds ahead of the second-place finisher.

D’Agostino completed the rare two-for-two feat in distance events with another individual crown in the 3,000 meters on Saturday night, with a time of a 9:01.08. The Topsfield, Mass., native now has three individual NCAA titles. She captured her first title at the 2012 NCAA Outdoor Championships in Des Moines, Iowa, in the 5,000 meters.

“This weekend was extremely fun,” she said with a large grin on her face.

When asked if the gravity of the situation had sunk in yet, she responded, “As much as it can an hour after finishing!”

“I was so happy for Abbey when she crossed the finish line and accomplished what we set out to do here this weekend,” assistant track and field coach Mark Coogan said.

D’Agostino’s former Big Green teammate Alexi Pappas ’12, now running for the University of Oregon, finished sixth in the 5,000 meters on Friday and eighth in the 3,000 meters on Saturday.