As a first-year student at Princeton, Amy Gladfelter knew she had an affinity for biology and just assumed she would be a doctor. “If you liked thinking about the mechanics of life, you were expected to enter the medical field,” she says. However, after an encounter with molecular biology Gladfelter went off in a new direction. 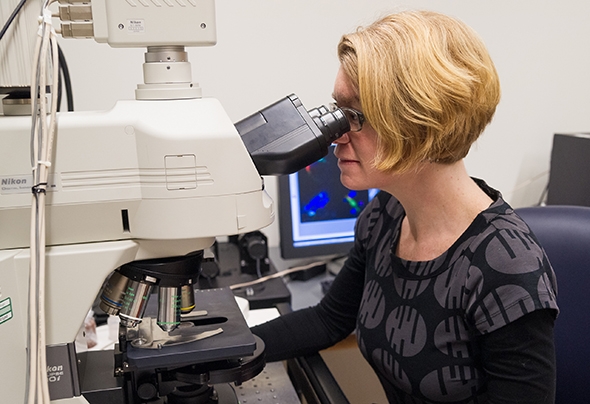 Molecular biologist Amy Gladfelter explores the potential of proteins through the magic of microscopy. (Photo by Eli Burakian ’00)

“In my first molecular biology class, I became immediately transfixed by both the chaos and order that occurs in each and every living cell on the planet,” she says. “It stirred a passion I feel to this day about understanding the inner life of a cell.”

Now an associate professor in the Department of Biological Sciences at Dartmouth, Gladfelter still has that mindset and revels in “watching how cells actually go about their business.” While Gladfelter has chosen the lab bench over the bedside, she continues to investigate medically relevant matters. In addition to her biological sciences appointment, she is an associate professor in the Molecular and Cellular Biology Graduate Program and a member of the Dartmouth-Hitchcock Norris Cotton Cancer Center.

Gladfelter focuses her research on proteins, the large molecules built of chains of amino acids according to plans dictated by DNA. Proteins are everywhere in the body, performing innumerable functions. They may even play a role in signaling the onset of a disease.

Gladfelter has discovered some proteins that act like prions—the nefarious disease-causing proteins. Her prions, however, appear to be positive agents, facilitating the transmission of building instructions transcribed from the DNA to protein construction sites (ribosomes) where the amino acid chains are formed.

Prions are generally regarded as infectious agents that bring about fatal neurological disorders in humans and animals, such as mad cow disease. They are proteins whose molecular chains are unusually contorted. Their peculiar behavior and their relation to diseases have captured Gladfelter’s interest. While she does not know whether these are genuine prions, Gladfelter says they certainly behave like them.

“Prion-like behavior means they aggregate or clump together within a cell,” she says. Those she is observing are making controlled aggregates, in which the assembly process appears to be kept in check, as opposed to the diseased state, where they are out of control.

“It is a real delicate balance of having small enough aggregates that you can position these transcripts but not too many or you kill the cell,” says Gladfelter. “We are trying to understand how you have good aggregation but not bad aggregation, and how you regulate that balance. With this understanding, maybe we can develop therapeutics that can reverse some of the aggregation processes that lead to mad cow and other neurodegenerative diseases.” 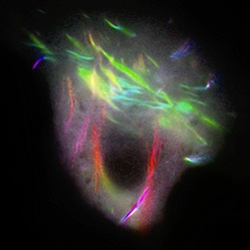 Another group of proteins that fascinates Gladfelter are known as the septins. “At least 13 different kinds of septins appear throughout the body and they’ve been linked to myriad human diseases,” she says. “When you have too many of them, or not enough, or when there is an imbalance in them, they have been associated with many different human cancers.” One of these septins is already in clinical use to screen people for colon cancer.

Gladfelter notes that among cancer biologists there is an interest in understanding how these proteins assemble and what has gone wrong with them when they are linked with cancer. Septins in the brain are increasingly being implicated in diseases such as Alzheimer’s and Parkinson’s, and they are also thought to play an important role in learning and memory function as well as infertility problems.

“Why is it that when they are out of balance or incorrectly expressed, we get these kinds of diseases?” she asks. “We don’t know, and we don’t even know how they work in normal cells.” One potential practical application of Gladfelter’s research could be to use septins as diagnostic tools. “However, the goal of our current work is more to understand the nuts and bolts of how they normally function so that someone can then interpret a malfunction better.”

Another facet of Gladfelter’s work concerns the tools for elucidating these “nuts and bolts.” She has been instrumental in the development of new microscope technology and, in concert with colleagues from the Marine Biological Laboratory (MBL) in Woods Hole, Mass., recently organized a symposium at the Annual Meeting of the American Association for the Advancement of Science (AAAS), “Innovations in Imaging: Seeing is Believing.”

An important focus of the symposium was live cell microscopic imaging, a technique brimming with challenges. “The challenges include just keeping things alive, keeping up with things that are moving fast, and trying to image cells and proteins that are incredibly small,” says Gladfelter. “But the challenges this methodology presents are outweighed by the significant advantages over the static picture one sees on a stained, preserved slide,” says Gladfelter. “You get very, very different stories whether you just look at a snapshot or a movie.”