Ayo Coly has taught Chinua Achebe’s Things Fall Apart in all of her courses since she began as an associate professor of African and African American Studies at Dartmouth six years ago, and she has found that nearly every one of her students read the book in high school.

That is as clear a picture as she can give of the significance of the Nigerian author who came to be known as the father of African literature, and who had numerous ties to Dartmouth. Achebe died Thursday, March 21, 2013, in Boston. He was 82. 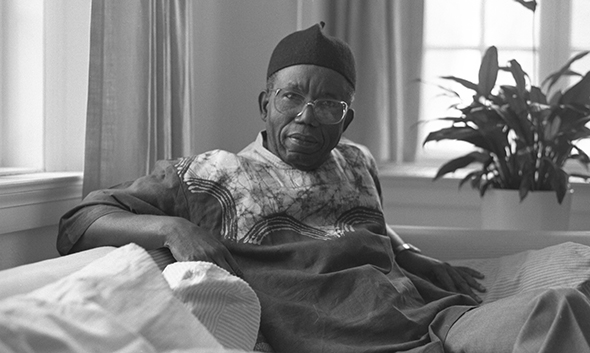 Chinua Achebe, who died on March 21, 2013, at age 82, received an honorary degree from Dartmouth in 1972. In 1990, Achebe was in residence at Dartmouth as a Montgomery Fellow. Above, he is shown sitting in the living room of the Montgomery House. (Photo by Stuart Bratesman)

Although there is a rich literary history from Africa in both African and European languages, “we can say Achebe is the inventor of African literature because he made it known beyond the borders of Nigeria and beyond Africa,” Ayo says. “I would like to acknowledge the way Chinua Achebe appropriated and transformed the European genre of the novel and conformed it to convey his own culture, his own agenda, as a Nigerian, as an African.”

Achebe was in residence at Dartmouth in 1990 as a Montgomery Fellow. In 1972, under President John Kemeny, Dartmouth awarded Achebe the first of his many honorary degrees. 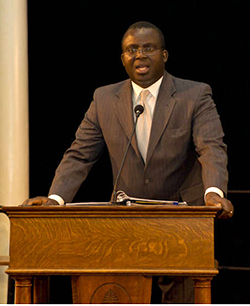 Chinua Achebe’s other novels include No Longer at Ease, Arrow of God, A Man of the People, and Anthills of the Savannah.

He received many awards, including the Nigerian National Trophy and the 2007 Man Booker International Prize for fiction. He was founding editor of African Writers Series 1962-72, and was chairman and publisher of the journal, African Commentary.

Since September 2009, he had been a professor of Africana studies at Brown University. In addition to his writing career and his time as a Montgomery Fellow, Achebe served as a senior research fellow and a professor of English at the University of Nigeria, Nsukka; pro-chancellor and chairman of council at Anambra State University of Technology, Enugu; foreign honorary fellow of the American Academy and Institute of Arts and Letters; and he lectured extensively at universities in Nigeria, Europe, and the United States.