Dartmouth Swimmer Ready to Make a Splash at NCAA Championship

Editor’s note: On Saturday, March 30, Nejc Zupan ’14 placed eighth in the 200 breaststroke at the NCAA Division I Men’s Swimming and Diving Championship, becoming the first Big Green swimmer to ever finish in the top 10 at the national championships. Zupan also competed in the 200 individual medley (placing 42nd) and in the 100 breaststroke.

How big a splash has Nejc Zupan ’14 made for Dartmouth’s swimming and diving program? The Slovenian will be the first Big Green swimmer to compete in the NCAA Championship since Todd Taylor ’80 in 1980. 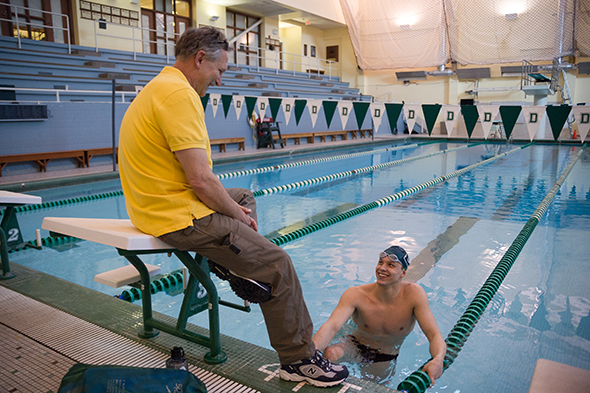 And at the Ivy League Championship in early March, Zupan became the first swimmer in Dartmouth history to be named Swimmer of the Meet, a distinction he earned for capturing three Ivy League titles: the 200 and 400 individual medley and the 200 breaststroke (he also set Ivy League records in each event).

Zupan competed in the 200 individual medley at the NCAAs on Thursday, March 28, finishing in 42nd place with a time of 1:46.39. This was three seconds off his entry time of 1:43.94, which would have placed him among the top 16. He was still the highest finisher among Ivy League entrants, with Princeton’s Ryan Sanborn placing 60th. Zupan swims the 100 breaststroke on Friday, March 29, and the 200 breaststroke on Saturday, March 30. In the latter event, he has recorded the country’s 7th fastest time. 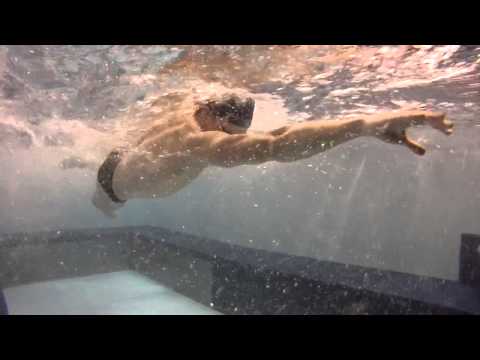 “It’s definitely a huge honor to represent Dartmouth on the national level,” says Zupan, who spent his spring break in Hanover, training for the NCAAs. “It’s also a huge responsibility for me since I’m the first swimmer in 33 years that’s going to be representing Dartmouth at the NCAA Championship. So it’s sort of a mixed feeling between a huge responsibility and a big honor.”

Head Men’s and Women’s Swim Coach Jim Wilson, who describes Zupan as an extremely hard worker, had him train in the endless pool (shown in the video) during spring break, and also had him “working on his starts and turns and getting a good feel for the breaststroke” in Karl Michael Pool.

“The breaststroke events are new for him, but he’s acquired the skill easily and continues to improve, moving from double Ivy League Champion in distance freestyle as a freshmen to triple Ivy League Champion in the IMs and breaststroke this year,” says Wilson. “He has gotten much faster, but so has the Ivy League, this year taking 20 athletes to the NCAA Championships where three years ago that number was only six.” 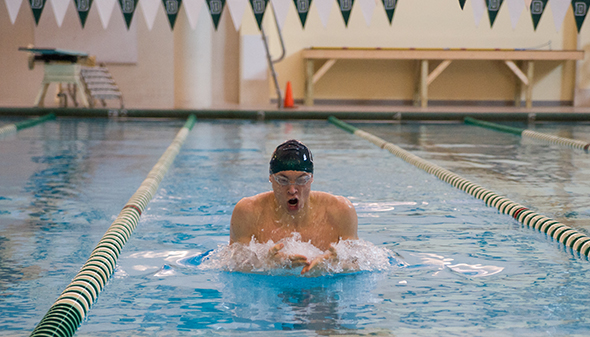 Zupan is competing in three events at the NCAA Championship: the 200 individual medley, the 100 breaststroke, and the 200 breaststroke. (Photo by Eli Burakian ’00)

A double major in economics and mathematics, Zupan also works hard in the classroom. He and another undergraduate performed research for Professor of Mathematics Dorothy Wallace that was published and which they presented at a math conference in November. And as a Presidential Scholar, he worked for two terms with B. Espen Eckbo, the Tuck Centennial Professor of Finance at the Tuck School of Business, on a large-scale research project in the area of corporate mergers and acquisitions.

“He was a diligent research assistant and clearly interested in the contribution of the project,” says Eckbo. “One could say that he navigated the vast pool of data in much the same way that he approaches the swimming pool—with a dedication to excel.”

When he graduates from Dartmouth, Zupan plans to work in finance or consulting. But for now, he’s focused on the NCAA Championship. “I’m definitely excited about the meet, excited to show what I can do,” he says. “I hope that everything works out in the end and we come out ahead.”

This year’s NCAA Division I Men’s Swimming and Diving Championship is being held in Indianapolis, Ind.