An exceptional private collection of Japanese woodblock prints will be presented at Dartmouth’s Hood Museum of Art from April 6 to July 28, 2013. 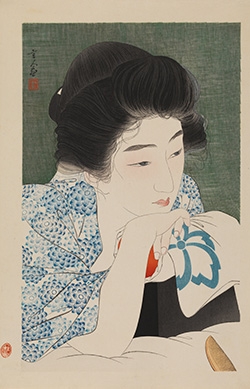 “The Women of Shin Hanga: The Judith and Joseph Barker Collection of Japanese Prints” will display nearly 100 examples from the Barkers’ extensive collection of Japanese prints that showcases two centuries of Japanese print designers’ engagement with female subjects. The exhibition will focus primarily on depictions of women that were created by the leading artists of the shin hanga (new print) movement of the early 20th century, a time when rapid modernization and increased contact with the West gave rise to new modes of artistic expression and representation of women. A promised gift to the Hood Museum of Art, the Barker collection represents the single largest contribution to the Hood’s Japanese art holdings, which have expanded significantly over the past decade.

“The exceptional caliber of the Judith and Joseph Barker collection affords a unique opportunity to trace artists’ engagement with female subjects across a pivotal period in the history of Japanese printmaking,” says Michael Taylor, director of the Hood Museum. “We are deeply grateful to Joe and Judy for sharing their remarkable collection, whose promised donation will advance the Hood’s robust tradition of presenting work by Japanese artists.”

The 66 shin hanga prints that form the core of the exhibition encompass a diverse range of female archetypes from early-20th-century Japanese society, ranging from geisha associated with traditional practices to so-called “modern girls” characterized by their Westernized appearance and liberated lifestyle. Also included in the exhibition are 24 prints, published between 1767 and 1897, which provide a contextual overview of female representations in Japanese printmaking prior to the emergence of shin hanga. Curated by Allen Hockley, associate professor of Art History at Dartmouth, “The Women of Shin Hanga” includes the work of such influential shin hanga practitioners as Itō Shinsui, Hashiguchi Goyō, Torii Kotondo, Kitano Tsunetomi and Kobayakawa Kiyoshi.

Judith and Joseph Barker’s interest in shin hanga prints was inspired in part by Joseph’s early discovery of Japanese printmaking traditions as a Dartmouth undergraduate, and the Barkers’ promised gift to the Hood advances a long tradition of alumni contributions to the museum’s Japanese art collection.

“With its unparalleled commitment to educational programming and community engagement, the Hood Museum will make an ideal home for our treasured collection of Japanese prints,” says Joseph Barker ’66. “Judy and I hope that visitors to the Hood Museum will discover in these works the same meticulous artistry and breathtaking beauty that has captivated us for so many years.”

Whether they feature conservatively dressed women in traditional costumes or geisha, modern girls, or nudes, the prints in the exhibition demonstrate the importance of both traditional and innovative production methods and subjects to shin hanga depictions of women. Artists focused their attention on hairstyles, cosmetics, clothing, and fashion accessories, the most recognizable markers of contemporary women. Woodblock carvers and printers used modern techniques to create, for example, intricately carved coiffures that reveal hundreds of individual strands of hair, and the subtle application of color to convey flesh tones and cosmetics including lip color and eye shadow. As a final touch, ground mica mixed with pigment highlights the metallic properties of the jewelry, hair ornaments, and mirrors. The pristine quality of the works on view in “The Women of Shin Hanga” at the Hood Museum offers a rare opportunity to experience these technological marvels within the context of a country in the throes of economic, industrial, and social modernization. 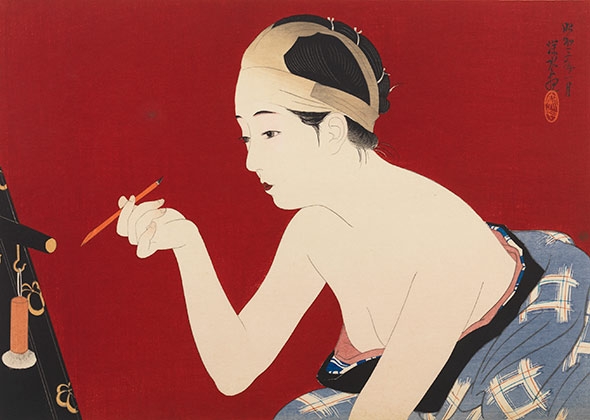 Dartmouth has long been a leader in integrating the arts into the collegiate experience, from the establishment of one of the nation’s first campus-based performing arts centers to the commissioning of new work and promotion of artist-in-residence programs on campus. Dartmouth is reaffirming and deepening its commitment to the arts throughout the 2012-13 academic year through a yearlong series of special programs, events, and initiatives that highlights the centrality of the arts as an indispensable component of its educational experience. Major initiatives include the opening of the Black Family Visual Arts Center, the 50th anniversary of the Hopkins Center for the Arts, the initiation of an expansion project at the Hood Museum, as well as a series of programs exploring the intersections between the arts and other disciplines. Together these initiatives reflect and celebrate both the university’s historic commitment to the arts and its role as a model for the artistic campus of the 21st century.

The public art initiative of the Year of the Arts at Dartmouth is made possible in part by the generous support of the Offices of the President and the Provost. For more information, please visit arts.dartmouth.edu.