“Splendid isolation” is what the British labeled their foreign policy in the late 19th century, and it is also how Kathleen Muldoon describes the island of Madagascar as the ancestral lemurs found it more than 65 million years ago. The 309,000-square-mile island was devoid of predators or any other animal life, and offered a wide array of enticing habitats, from rainforests to deserts. 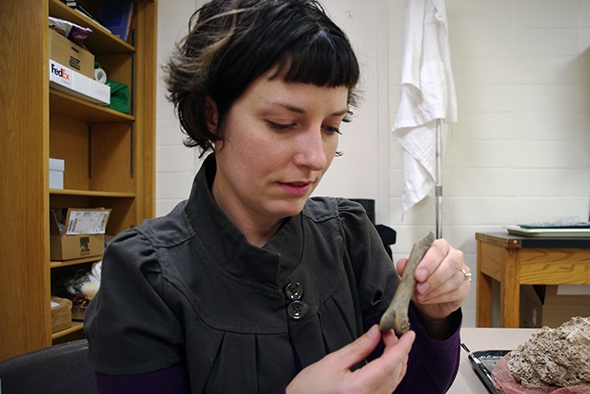 Professor Kathleen Muldoon examines a humerus, an upper arm (forelimb) bone from a member of an extinct lemur species. (Photo by Joseph Blumberg)

But today this Garden of Eden scenario is being transformed into an ecological nightmare of death and destruction. Our most distant primate cousins are disappearing in the face of radical changes in their environment caused by the presence of humans.

Muldoon, an assistant professor of anatomy at the Geisel School of Medicine at Dartmouth and an adjunct assistant professor in the Department of Anthropology, studies the evolution of the Madagascar mammals and their ecology. It is an ecology that framed their explosive divergence and dispersal, and now presents challenges to their survival.

Her focus is on recent extinctions, those since the arrival of humans on the island 2,500 years ago. Muldoon’s goal is an understanding of how these extinctions came about—an understanding that could inform what is happening now and contribute to the conservation of today’s lemurs. She delves into the prehistoric record as revealed by her excavations, in the hope of drawing insights into the changes experienced by lemur communities over time.

“Since the arrival of humans, approximately 90 percent of the primary forest has been degraded or completely eliminated, and Madagascar’s native mammal community has suffered the loss of dozens of species, including the giant subfossil lemurs that lived until at least 500 years ago,” Muldoon says. The term “subfossil” refers to remains in which the fossilization (mineralization) process is not complete.

Lemurs evolved on the island of Madagascar, most probably arriving aboard a large mat of floating vegetation. From the African mainland, they rafted across the 300-mile wide Mozambique Channel. They adapted to a variety of niches and diversified into species as small as a mouse to giants the size of a male gorilla. While many of these forms have passed into the depths of time, there are still more than 100 lemur species, and Madagascar is still the only place on Earth where they naturally exist. However, habitat destruction has reduced their numbers to a point where they are facing extinction. 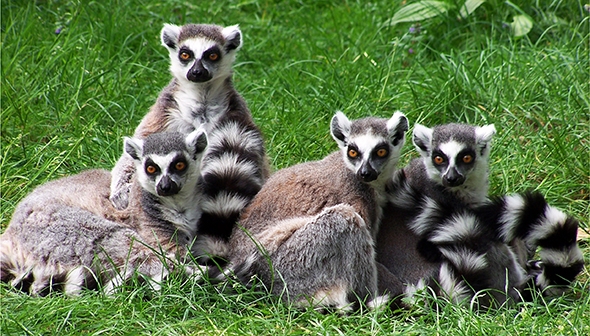 Once the “flagship species” of Madagascar, the ring-tailed lemur (Lemur catta) is facing extinction from habitat loss and hunting. (Photo courtesy of StockFreeImages.com)

Deforestation in Madagascar is largely the result of slash and burn agriculture. “Rice is a very big dietary staple on Madagascar, and many regions of primary habitat have been cut down, terraced, and flooded so that rice could be grown,” says Muldoon, “essentially fragmenting what were once continuous habitats.”

Under the leadership of Madagascar’s progressive former president Marc Ravalomanana, conservation had been a priority, and there were plans to increase the number of protected areas on the island by 25 percent. However, a military coup in 2009 drove him from office and all protective environmental regulations were abandoned. There has since been a dramatic increase in illegal logging, especially the mass removal of trees to harvest rosewood, prized in China for luxury wood furniture.

And then there is the hunting. Historically, ethnic groups in Madagascar regarded lemurs as embodying ancestral spirits, so taboos kept the lemurs safe from human predation. However, with the influx of loggers and other migratory workers, there is increasing evidence of the hunting of lemurs and a developing bush-meat trade to feed the migrant workers.

Lemur populations have been so drastically reduced that a meeting of the International Union for the Conservation of Nature (IUCN) was called in the summer of 2012, specifically to talk about lemurs. “They concluded that more than 90 percent of the lemur species on the island have a critical, endangered, or vulnerable extinction risk rating, so that nearly all of them are considered to be in danger of extinction,” says Muldoon.

While the IUCN recommended increasing protection for the surviving lemurs, in the absence of positive political leadership there is currently little impetus in that direction.

“Unfortunately, the future doesn’t look very promising,” says Muldoon. “There is an election planned this year and people seem to be pretty hopeful and optimistic that change is coming. Scientists are trying to direct public attention to these issues so that if and when a new government is put into place, collaboration with the conservation community might be reestablished.”

Muldoon is not totally without hope. She says that there is a growing interest among the Malagasy people for the promotion of local and foreign ecotourism, bringing the tourists in to revel in the island’s unique animal life. “The situation is depressing now, but I think public interest and awareness of some of these issues are growing,” says Muldoon, “but there are changes happening that may not be reversible, so it is important to bring attention to them quickly and emphatically.”