Twenty-three scholars—from a range of disciplines that include biology, Native American studies, and sociology—have joined the ranks of Dartmouth’s Arts & Sciences faculty this academic year. In this weeklong series, Dartmouth Now takes a closer look at some of these scholars, their research, and what brought them to Dartmouth.

Sean Kang, an assistant professor of education, earned his PhD from Washington University in St. Louis. In this interview, Kang talks about the role of psychology in education and his impressions of Dartmouth. 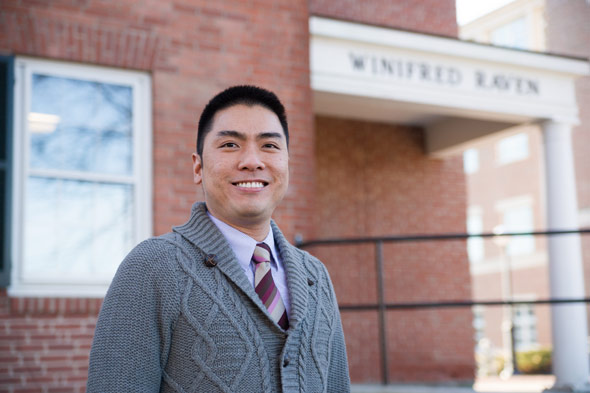 “An overarching goal of my research is to bridge the gap between cognitive psychology and education,” says Professor Sean Kang. (Photo by Eli Burakian ’00)

This Dartmouth Now series features four of the scholars who have joined Dartmouth’s Arts & Sciences faculty during the 2012-2013 academic year. The week’s headlines include:

Finding a Calling:“ In my first year of college, I took introductory courses in a range of disciplines, and while I enjoyed most of the courses, it was an introduction to psychology course that grabbed my attention the most. I was intrigued by the complexities of human behavior, and found the various psychological phenomena discussed utterly fascinating.”

On the Horizon: “There has been a growing realization among policymakers in recent years that educational policy and practice need to be grounded on rigorous scientific evidence rather than fads or ideology. But change is difficult, and there is often inertia and resistance. Nonetheless, my prediction and fervent hope are that over the next decade, the field of education will undergo a transformation that leads to a discipline that embraces the contributions of psychology and neuroscience, and is guided by the science of learning.”

On Dartmouth: “My colleagues in the education department have been very supportive and generous with their time and advice. I feel like no question is too small or silly to ask, and they have always been willing to share their experiences and provide helpful suggestions.”