As Associate Professor Melanie Benson Taylor was helping line up speakers for a Native American studies event in April, she had a realization.

“I noticed how many of the speakers are authors on my syllabus for my spring term course,” says Benson Taylor, who teaches Native American literature this term. “It’s amazing. The impact that will have on students is extraordinary.” 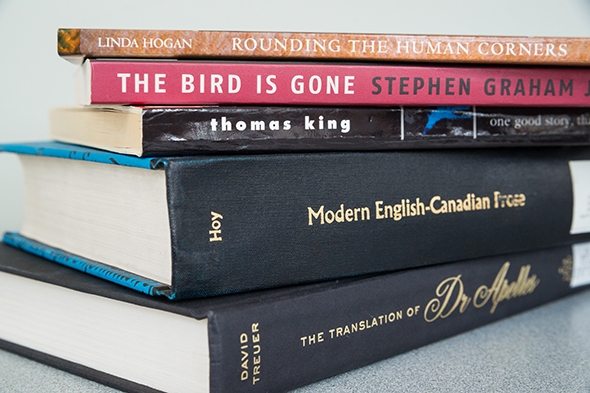 As part of the 40th anniversary of the Native American Studies Program at Dartmouth, four Native American writers and a scholar of Native writing will take part in the panel discussion, “Telling Lives: Native American Writing in the 21st Century.” (Photo by Eli Burakian ’00)

As part of the 40th anniversary of the Native American Studies Program at Dartmouth, four Native American writers and a scholar of Native writing will take part in a panel discussion next week. Linda Hogan, Helen Hoy, Stephen Graham Jones, Thomas King, and David Treuer will participate in a discussion titled, “Telling Lives: Native American Writing in the 21st Century.” The panel, free and open to the public, begins at 4 p.m. on April 5 in Moore Hall’s Filene Auditorium. There will be a book signing afterward.

“This is a great event to look back and celebrate our 40th anniversary, which is remarkable, but also to look forward into 21st-century Native literature,” says Senior Lecturer of Native American Studies Vera Palmer, who helped organize the event.

The speakers will also meet with faculty at a luncheon, visit classes, and have dinner with students.

“I’m curious to know how well the authors’ intentions match our interpretations of their works,” says Betsy Winkle ’15, who is enrolled in the same class.

“Students need models of what artists can look like,” says Benson Taylor. “I can’t think of five writers who are better embodiments.”

The 40th anniversary celebration featured a lecture last fall from noted legal scholars as well as upcoming events, including an exhibit about the founding of the Native American Studies Program in Baker-Berry Library.

Palmer is looking forward to seeing the literary luminaries interact.

“The writers bring a wide range of expression, certainly on the page, but I would also suggest a wide range of creative perspective,” says Palmer. “I think it’s terrific to have so many different insights.”

The event is sponsored by the Ed and Molly Scheu Fund in Native American studies and the Office of the President.