Editor’s note: Cardinal Jorge Mario Bergoglio of Argentina was picked Wednesday, March 13, 2013, as the 266th pontiff of the Roman Catholic Church. The first non-European pope in 1,200 years, he will be called Pope Francis.

In the days before the Conclave entered the Sistine Chapel to choose a new pope to succeed Benedict XVI, the first pope to resign his office in nearly 600 years, Dartmouth’s Randall Balmer, the Mandel Family Professor of Arts and Sciences and chair of the Department of Religion, and Christopher MacEvitt, an associate professor of religion, talked with Dartmouth Now about the process of picking the new pope.

With Cardinals entering the Sistine Chapel to elect a new pope, the spectacle of the conclave merges a centuries-old script with spur-of-the-moment improv, but the likelihood of a radical reformer emerging from the gathering is very slim, observers say. 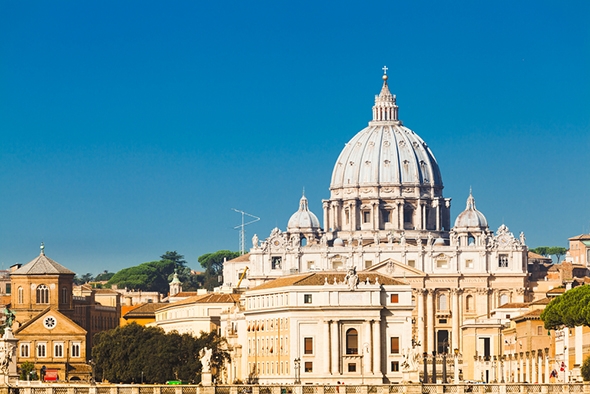 The conclave’s 115 Cardinals isolated themselves in the Sistine Chapel this week to elect the 266th pope.  (Photo courtesy of Shutterstock)

“For the last two weeks they’ve just been making things up,” says Christopher MacEvitt, an associate professor of religion who specializes in 12th- and 13th-century Christian communities. “This is unprecedented. They’ve been dealing with questions like ‘what do we call the former pope?’ and ‘where is the former pope going to live?’”

But now that the 115 Cardinal electors have filed into the chapel and the order ”Extra omnes“ (”Everybody out“) has been pronounced, the process returns to one that has been in place for some 800 years. True to history, the basic philosophy of the next pope will be dictated by his predecessors, in this case John Paul II and Benedict XVI, both firm conservatives who named every man in the College of Cardinals, says Professor Randall Balmer, the Mandel Family Professor of Arts and Sciences and chair of the Department of Religion.

”They have appointed to the College of Cardinals men very much in their own images, that is, with very conservative, traditionalist views on women and celibate clergy and so forth,“ Balmer says. ”Unless there is a remarkable person coming out of the conclave who is willing to rethink traditional doctrine and willing to step outside the box, I don’t see a whole lot of prospects for change.“

MacEvitt and Balmer both compared the legacy of John Paul and Benedict to a president’s power to name judges and justices. ”It is as if you have a Supreme Court entirely appointed by Republicans,“ MacEvitt says.

Last Pope to Resign Landed in the ‘Inferno’

The last and only pope to voluntarily resign was Celestine V in the 13th century, and the move landed him in the Inferno, says Christopher MacEvitt, associate professor of religion.

Celestine was a solitary holy man when the cardinals enlisted him to lead the church. The idea was that he would clean up the image of a Vatican tarnished by scandal, says MacEvitt. He lasted about six months.

”He said, ‘I’m a hermit, not a pope.’ Those are two very different kinds of roles. A pope has to be a bureaucrat and an administrator,“ MacEvitt says. ”He did become a saint, but he was specifically canonized for his personal qualities, not as pope.“

Celestine’s successor, Boniface VIII, led the church into years of intrigue. Boniface got into enormous conflicts with the French king and local Roman aristocrats, MacEvitt says.

”Dante famously put Celestine in Hell, in The Inferno, for refusing to remain as pope because the consequences were kind of disastrous,“ MacEvitt says. ”Dante did not like Boniface VIII at all and blamed all the disasters that ensued on Celestine for having resigned.“ The poet consigned Boniface to the Eighth Circle of Hell.

What the Cardinals electors are looking for in the next pope is anyone’s guess, MacEvitt says, but using the last papal resignation as guide may not be the best idea.

If the Cardinals pick a relatively young pope, he could have a profound effect on the future of the Church through this power of appointment. That will likely be part of the calculus as the cardinals deliberate.

Balmer and MacEvitt agree that one skill likely to be at the top of the next pope’s job description is the ability to manage the church bureaucracy and deal with scandals within the Vatican bureaucracy.

”That’s been a problem under Benedict. There has not been a lot of control over the Curia—the Vatican bureaucracy,“ MacEvitt says. ”They are not going to be discussing things like celibacy and woman priests, things like that. It’s not on the floor. But there was a report that Benedict wrote about the VatiLeaks scandal. It is a secret report, we don’t really know what it says, but the Cardinals have requested to see it.“

The VatiLeaks scandal erupted after some of the pope’s personal papers were stolen and published in the press, revealing infighting and corruption within the Curia. This, along with the problems of mismanagement within the Vatican bank and the continuing child sexual abuse scandals, awaits whoever is elected, Balmer says.

Reform in the sense of a more transparent Vatican bureaucracy and greater communication to the leadership outside the Curia is likely a top concern among the electors, but there is little indication that radical reform is on the horizon, Balmer says. Church edicts including the prohibition of the use of contraceptives and the prohibition of women from the hierarchy—which have moved many Catholics, particularly in North America, to leave the faith or to give less weight to Catholic dictates—will likely remain in force under the next pope, Balmer says.