Gevorg Grigoryan has been a professor for less than two years. But already his research is being nationally recognized: He is the winner of a 2013 Sloan Research Fellowship. 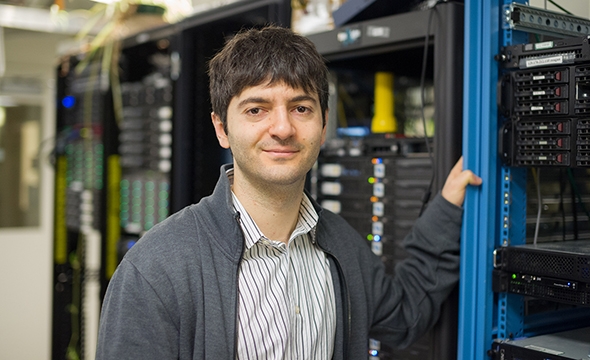 “I’m very excited to receive this,” says Professor Gevorg Grigoryan. “The award invigorates me and renews my excitement for my research goals.” (Photo by Eli Burakian ’00)

“The Sloan Research Fellows are the best of the best among young scientists,” says Paul L. Joskow, president of the Alfred P. Sloan Foundation. “If you want to know where the next big scientific breakthrough will come from, look to these extraordinary men and women.”

“I’m very excited to receive this,” says Grigoryan. “The award invigorates me and renews my excitement for my research goals.”

Grigoryan, assistant professor of computer science, is one of 126 scholars to receive a Sloan Research Fellowship this year. The award, given annually to scholars at U.S. and Canadian institutions, is a two-year fellowship that provides a $50,000 grant to promote research for scientists who demonstrate “outstanding promise.” Grigoryan was one of 12 recipients in the molecular biology category.

“Gevorg is uniquely capable of addressing some of the fundamental scientific challenges of our time, with a blend of computational and laboratory methods,” says Associate Dean of the Faculty for the Sciences and Champion International Professor David Kotz ’86.

Grigoryan researches proteins—molecules that perform many important tasks in living organisms. He works to understand protein structure and to create proteins to perform certain tasks, such as fighting disease molecules. In order to understand how these vital molecules function, Grigoryan says, you have to know how proteins are structured.

“There are 20 types of amino acids in nature. And any protein is a sequence of these 20 amino acids,” he says. “It’s like a language. These amino acids are like a 20-character alphabet; that’s the language in which nature writes the protein’s function.”

By analyzing the sequences in nature, Grigoryan hopes to learn to predict how certain protein sequences will function. The number of combinations of these amino acids is astronomical, he says. “Nature has sampled some of this space, but there is so much untapped territory.”

Grigoryan wants to explore that territory. To continue the alphabet analogy, Grigoryan is trying to create new words, by trying new sequences of amino acids that haven’t been found in nature.

“That’s our big goal, to learn to manipulate these molecules, such that we can engineer them to perform tasks at the atomic scale,” he says.

One use for medical purposes would be proteins designed to fight disease. But Grigoryan says there may be other uses, too, that aren’t easy to anticipate. “I think the most important application will only become clear after the fact,” he says.

How does he conduct this research? Like many in science today, Grigoryan says, his work on proteins crosses disciplines. Because Grigoryan’s studies are theoretical and experimental, he has two parts to his laboratory, a “dry lab” in Sudikoff and a “wet lab” in the Class of 1978 Life Sciences Center.

“We create designs on the computer, we formulate sequences that we think are going to perform the necessary task, and then we walk over to the wet lab and actually make these proteins, and test if they work,” he says.

Grigoryan came to Dartmouth in 2011. He completed a PhD at the Massachusetts Institute of Technology and was an undergraduate at the University of Maryland, Baltimore County, where his father worked as a physicist. Grigoryan, who is originally from Armenia, says his father’s profession helped fuel his interest in science.

“When you have someone who has already walked that path,” he says, “they can dispense advice, introduce you to the field. It’s a huge advantage I think.”

Grigoryan hopes he can provide similar support to his students, and this fellowship will enhance his lab by funding staff salaries, new lab instruments, and travel to conferences.

The grant money is helpful, Grigoryan says, but the honor means more to him than funding. He is pleased that leaders in the field consider his work valuable.

“That’s what is gratifying,” he says.