When Ivy Schweitzer became a professor at Dartmouth in 1983, there weren’t many female colleagues in her field that she could look to as role models. 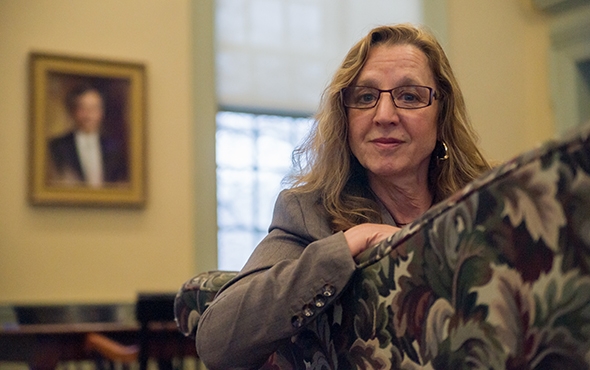 Professor Schweitzer, who came to Dartmouth in 1983, has been an influential mentor, teacher, and scholar. (Photo by Eli Burakian ’00)

Current junior professors in her department will have no such problem: Schweitzer has become quite the role model herself.

“She encouraged me to write a new chapter for my book, Transnationalism and American Literature, that significantly amplified its scope,” says Boggs, the director of the Leslie Center for the Humanities. “Ivy Schweitzer is a dedicated mentor.”

Schweitzer has recently gained further recognition: The professor of English was awarded the Modern Language Association’s Division for American Literature Before 1800 Lifetime Achievement Award. For her mentorship, scholarship, and teaching, Schweitzer became the first recipient of the award since 2009 and the third female winner ever. The award was presented this month at a conference in Savannah, Ga.

“It’s something I never expected,” she says.

University of California, Berkeley Professor Kathleen Donegan spoke about Schweitzer at the award’s presentation: “This award is about lifetime achievement in research, teaching, and service, and Ivy’s career unites these three areas seamlessly.”

“I wanted to be a marine biologist,” she says. After a calculus class in her first year at SUNY Buffalo, though, Schweitzer decided she wanted to pursue English.

“I’m not sure I would have made a good marine biologist,” she says. “But I was always a big reader and writer, so that seemed like a better fit.”

She earned a PhD from Brandeis University, where she carved out a niche studying early American poetry. Hanging above the desk in her Sanborn office is a poster not of a colonial writer, though, but of Walt Whitman.

Whitman is one of her heroes, she says, as a poet who challenged puritanical views of the body and gender. “If I were on a desert island,” says Schweitzer, “I would want to have Whitman’s great work, Leaves of Grass.”

A self-described feminist and part of the hippie generation, Schweitzer finds many early writers that she studies, such as John Winthrop and James Fenimore Cooper, to be intriguing even if they’re not exactly likable.

“I took an almost adversarial approach as a scholar. I thought about how narrow-minded, how patriarchal these people were,” she says. “I think that helped me be critical in my research.”

In 1983, Schweitzer brought her research to Dartmouth, which had begun coeducation a little more than a decade earlier. At the time, less than 23 percent of Dartmouth’s tenure or tenure-track Arts & Sciences faculty members were female.

“I went to all these conferences on early American literature, and I was often the only woman, it seemed,” she says. “I felt like an outsider.”

“This is something my mother taught me,” says Schweitzer, “if you go to a community you don’t like, help change and create a community that you want to live in.”

Schweitzer has helped shape the Dartmouth community, both inside and outside the classroom. In recent years, she has taught a course that brought together area high school and Dartmouth students to study American poetry. She was the recipient of a National Endowment for the Humanities grant to support her ongoing work of digitalizing the papers of Samson Occom, a Mohegan Indian who helped raise funds for the founding of Dartmouth. She is co-producing a documentary film, Telling My Story, about Dartmouth students and female inmates writing and performing a play together.

Beyond Dartmouth, she has shaped scholarship.

Since 1990, Schweitzer has served as an editor for the Heath Anthology of American Literature for the volume that covers the period 1400 to 1800. She has been influential in exploring literary voices beyond the Puritans.

“Ivy expanded the representation of texts to include many that might once have been seen to fall outside the boundaries of conventional form, content, or language,” says Donegan.

“This was almost a German or French or Spanish speaking country,” says Schweitzer. “I think we sometimes forget that. There is a lot of important literature from different cultures that isn’t very visible.”

Schweitzer continues to serve as an editor for the Heath Anthology. The author of two books, Schweitzer is working on her third scholarly study of American women writers from 1650 to 1990. She plans to start a blog about a year in the life and poetry of Emily Dickinson.

Schweitzer says the real reward of her career has been the relationships she has built with other faculty members and her students, though she is appreciative of this new honor.