Dartmouth researchers have taken an important step in the ongoing battle against secondhand tobacco smoke. They have pioneered the development of a breakthrough device that can immediately detect the presence of secondhand smoke and even thirdhand smoke.

Smaller and lighter than a cellphone and about the size of a Matchbox car, the device uses polymer films to collect and measure nicotine in the air. A sensor chip then records the data on an SD memory card. The technology is described in a new study appearing in the journal Nicotine and Tobacco Research.

“We have developed the first ever tobacco smoke sensor that is sufficiently sensitive to measure secondhand smoke and record its presence in real time,” says Professor of Chemistry Joseph BelBruno, whose Dartmouth lab conducted the research. “This is a leap forward in secondhand smoke exposure detection technology and can be considered the first step in reducing the risk of health effects.”

The U.S. Environmental Protection Agency says children are especially vulnerable to environmental tobacco smoke. Its effects on the young can include an increased risk of pneumonia, bronchitis, asthma, and Sudden Infant Death Syndrome. While many parents try not to smoke around their children, going to a different room or smoking out on the porch may not be going far enough. Now, for the first time, there is a prototype sensor that will let parents see whether or not their precautions make a difference.

Secondhand smoke comes from the burning end of a cigarette or from exhaled smoke. Thirdhand smoke, also a potential health hazard, according to the Mayo Clinic, is nicotine residue that remains on clothing, furniture, car seats, and other material after the air has cleared. 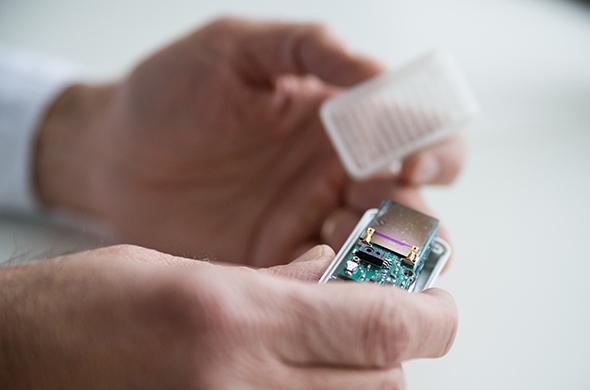 Smaller and lighter than a cellphone and about the size of a Matchbox car, the device uses polymer films to collect and measure nicotine in the air. (Photo by Eli Burakian ’00)

While the current device is a patent-pending prototype, BelBruno foresees the eventual availability of an affordable consumer version that will incorporate a computer processor, reusable polymer films, and a rechargeable battery. It may even incorporate an LED panel to provide instantaneous readouts.

In addition to its uses in safeguarding childhood health, there are commercial applications for these unique detectors. Installed in rental cars, hotel rooms, and restaurants, this device could help enforce owner and operator smoking bans through an alert system, much like ceiling-mounted smoke detectors.

“He knew that people at the Geisel School of Medicine at Dartmouth were interested in doing a study to try to reduce children’s exposure to secondhand smoke, and he knew that we were working on sensors. He got us together, we talked, and this project came out of it.”

Given the hundreds of compounds in cigarette smoke, BelBruno’s group began with a plan for a multi-component sensor but found this approach unnecessarily complex. The sensor they came up with detects cigarette smoke alone, simply and efficiently.

This research was supported by the American Academy of Pediatrics Julius B. Richmond Center of Excellence, funded through the Flight Attendants Medical Research Institute, and by the Norris Cotton Cancer Center at Dartmouth-Hitchcock Medical Center.