Growing up in South Korea, Jun Bum Sun ’14 had heard of an American activist who’d advocated for Korean independence. But it wasn’t until he arrived in Hanover that he felt a connection to the man known as “Korea’s favorite American.” 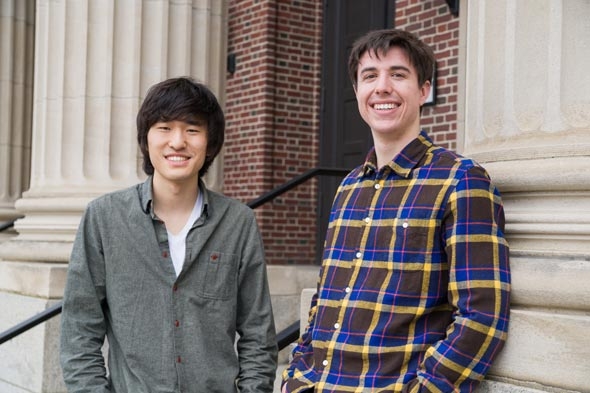 Jun Bum Sun ’14 (left) and Karl Schutz ’14 were intrigued by Homer Hulbert, Class of 1884, an American who fought for Korean independence. (Photo by Eli Burakian ’00)

“I’d read about him in history textbooks,” he says. “But I had no idea he was a Dartmouth alumnus.“

The activist was Homer Hulbert of the Class of 1884. After arriving on campus, Jun learned that Hulbert went to Dartmouth.

“It was fascinating,” Jun says. “Why would this American want to help Korea?”

Hulbert became a figure of fascination for Jun, as well as his friend and roommate, Karl Schutz ’14. The two history majors worked as interns last year for the Homer Hulbert Memorial Society in Seoul, South Korea. Now, Jun and Schutz want to help spread Hulbert’s story throughout Korea and across campus.

Hulbert, a great-great-grandson of Dartmouth founder Eleazar Wheelock, grew up in New Haven, Vt., near Middlebury College, where his father served as president. In 1886, Hulbert and two other Americans were sent to Korea by the U.S. Department of Education to help establish an educational system. Hulbert ended up spending more than 20 years in Korea, working as a teacher, historian, writer, and linguist.

Throughout his time abroad, Hulbert denounced Japanese colonial rule of Korea, which gained independence in 1945. Hulbert eventually became an aide to the Korean emperor, serving in a variety of capacities, including as a special envoy to President Theodore Roosevelt.

For his work on behalf of Korean independence, “Hulbert is one of the most beloved foreigners among Koreans,” says Dartmouth’s Soyoung Suh, assistant professor of history and Asian and Middle Eastern Studies.

But Hulbert’s influence is not limited to politics. He was also instrumental in modernizing the Korean language.

Jun and Schutz worked at the Hulbert Memorial Society in the summer and fall terms of 2012, respectively, with the support of the John Sloan Dickey Center for International Understanding. They researched Hulbert, transcribed handwritten letters, and translated his writings.

“My work at the society also had tremendous educational value for a history major,” says Jun. “It made me realize the value of historical narrative.”

The juniors worked closely with the founder of the society, Kim Dong Jin, who wrote a biography, Homer B. Hulbert: Crusader for Korea. Kim has called Hulbert the man “who loved Korea more than Koreans.”

“I think part of what made my work at the Hulbert Memorial Society so rewarding was that I knew my work was helping an organization that’s raising awareness about an American who genuinely cared for the Korean people,” says Schutz, who is minoring in Asian and Middle Eastern Studies.

Schutz, who is from Boise, Idaho, says he went to Korea to gain new perspectives, but also because he wanted to understand Hulbert and his passion for Korea.

“He seemed to have a normal trajectory growing up in Vermont, going to Dartmouth,” says Schutz, “and then, why Korea?”

Schutz still isn’t sure why Hulbert originally went to Korea, but he thinks he knows why the Vermonter became such an advocate for its independence.

“I think it came from empathy for the Korean people that naturally arose as a result of all the years Hulbert spent living there, interacting with Koreans on an everyday basis,” says Schutz. “I would have never understood that, however, without having gone to Korea. My four months living and working in Seoul left me very impressed with South Korea and its people and culture.”

Jun and Schutz plan to work together to translate Kim’s book into English. Jun will do the translating, while Schutz, an RWIT tutor, will assist in editing the translation.

Jun and Schutz want more Dartmouth students to have the sort of experience the two of them had in Seoul. They have already helped set up a first-year student with an upcoming internship at the Hulbert Memorial Society. Jun says he hopes it becomes a tradition for Dartmouth students to work there.

This October, a statue of Hulbert will be unveiled in downtown Seoul. In the meantime, Jun and Schutz will continue to work to reveal Hulbert’s story to Dartmouth and beyond.