‘Among the Best’: Winston ’14 Honored As Beinecke Scholar

While that is high praise, it is no higher than the praise bestowed by her mentor, Richard Wright, the Orvil Dryfoos Professor of Geography and Public Affairs.

“She’s among the best students I’ve worked with in 28 years of teaching at Dartmouth,” says Wright. 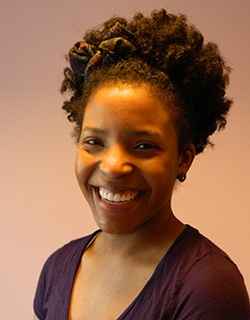 “Celeste is an extraordinary young scholar,” says Kristin O’Rourke, assistant dean for scholarship advising. “We are delighted to see her work and her potential in geography recognized by winning a prestigious Beinecke Scholarship.”

While at Dartmouth, Winston has been awarded a Mellon-Mays Undergraduate Fellowship (MMUF), been a National Collegiate Scholar, and worked as a mentor in the first-year student enrichment program.  Winston has also served as a research assistant for Assistant Professor of Geography Sharlene Mollett.

“Celeste is very committed to the discipline, particularly the aspects of social justice that run through our field,” says Mollett, who has taught Winston in two courses.

Winston says she would like to continue her study of social justice. Currently in Prague with a geography Foreign Study Program, Winston says she was ecstatic to hear the Beinecke Foundation would be supporting her future studies.

“As a graduate student, I want to study how children and adolescents from marginalized groups find agency through resilience, reworking, and resistance in their everyday lives,” says Winston.

Most recently, Winston has worked with Wright in researching black migrants’ resistance to assimilation in Atlanta, Ga. She has cultivated her interests, she says, with the help of her professors at Dartmouth.

“My experience at Dartmouth has fostered my love for the field of geography. I took my first geography course during my freshman winter and have continued to develop my passion for geography ever since,” she says.

That passion has been developed both in and out of the classroom.

In the winter of 2012, Winston traveled to Kenya to work for a nonprofit organization that promotes health and literacy in the area. While volunteering at a local school and hospital, Winston, an African-American, was forced her to rethink her notions of race and white privilege, as she was identified as a white person.

This experience helped her see how constructions of race are formed, says Winston. She became interested in studying space and place, and learning how notions of race are a function of both social and physical landscapes.

In addition, Winston has been an executive member of the Dartmouth Afro-American Society and has participated in both the global leadership program and the management and leadership development program through the Nelson A. Rockefeller Center for Public Policy and the Social Sciences.

The Beinecke Scholarship Program was established in 1971. The program is named for Edwin, Frederick, and Walter Beinecke, who were leaders of The Sperry & Hutchinson Company in the 1920s. A dedicated group of philanthropists, the brothers and their families helped establish Yale University’s Beinecke Rare Book and Manuscript Library in 1963. Winston is the only recipient this year whose focus is geography.

“Celeste is a poised and independent thinker,” says Wright. “When it comes to undergraduate scholars, she’s the real deal.”