Hundreds of alumni, faculty, and students gathered April 5 to 7 to honor Dartmouth’s 40th anniversary of coeducation during the Greenways: Coming Home celebration. 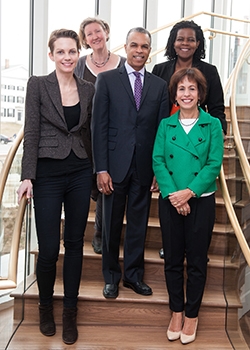 “This is a 40th birthday for the modern Dartmouth,” said President Carol L. Folt at the opening reception. “We’re going to celebrate the courage of all the people who were the pioneers; we’re going to be celebrating 40 years of incredible accomplishments.”

The weekend, attended by about 500, was highlighted by a brunch featuring four Dartmouth MacArthur Fellows and keynote addresses from Trustee Laurel Richie ’81, president of the Women’s National Basketball Association (WNBA), and actor and comedian Rachel Dratch ’88, a former cast member of Saturday Night Live.

In addition, there were 16 panel discussions throughout the weekend. The talks focused on a variety of topics, including career paths, sustainability, and challenges in the workplace. Producer Pamela Mason Wagner ’81 was on hand for the screening of her PBS documentary film MAKERS: Women Who Make America.

The celebration showed how women helped make Dartmouth what it is today.

And that work is “not over yet,” said Folt, in remarks delivered before the film.

“Students have been very active but not about the same issues that people faced 40, 30, 20 years ago,” she said. “There are new issues for a new generation.”

Folt, a faculty member at Dartmouth for more than 30 years, recounted Dartmouth’s progress through the decades. She pointed to the importance of the Women In Science Project, the rise in female faculty members, and the role of the arts community in giving voice to different groups of people on campus.

She also talked about the past academic year, calling it a gift, one in which “Women finally find out what it’s like to be the president of Dartmouth.” This was met with an emotional standing ovation from the packed crowd in Alumni Hall.

On a clear, windy Saturday, the day’s events began as Richie gave the opening keynote. After a moving introduction by her niece, Kara Richie ’11, the WNBA president appeared close to tears as she started her speech.

Richie was honored to be featured in the program, she said, alongside so many distinguished alumni who returned to campus.

Richie’s career on campus started in 1977. She became involved in the theater department, acting in plays, and joining the Black Underground Theater Association.

“I will be forever grateful for the arts community here at Dartmouth,” said Richie, who grew up in Ohio. “It was the most diverse group of people I’d ever seen.”

The liberal arts curriculum helped prepare her for a variety of work, Richie said—as an executive of the Girl Scouts, working for an ad agency to market Huggies diapers, and in her position with the WNBA. It speaks to the value of a Dartmouth education that so many alumni returned for Greenways, she said. “We always come back to this very, very magical place.” 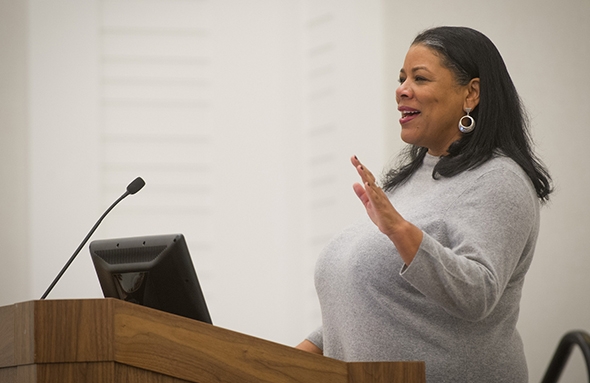 They came from around the world.

Pulitzer Prize-winning journalist Geeta Anand ’89, senior special writer at The Wall Street Journal, traveled from her home in Mumbai, India, to participate in the panel “The Write Stuff.”

Anand echoed Richie’s comments about the value of liberal arts. She had planned to go into medicine when she arrived in Hanover, she said, but felt liberated by the interdisciplinary approach at Dartmouth. “I came out of Dartmouth wanting to write about the world,” she said.

Throughout the weekend, the sense of reunion and nostalgia was palpable. Alumni greeted former classmates with long hugs. Smiles were abundant as former students recalled their time on campus. A few women listened to panels with arms wrapped around the backs of friends.

While there was much reminiscing, there was also a focus on the future, as some alumni were accompanied by their daughters.

In a panel about sustainability, Marianna Grossman ’80, president and executive director of Sustainable Silicon Valley, posed a challenge to Dartmouth. “What if we had a regenerative campus?” she asked, addressing sustainability efforts on campus. “Why not have that be the goal?”

Martha Pollack ’79, provost-elect and professor at the University of Michigan, gave her thoughts about online classrooms during the panel discussion of “Schools of Thought.” “I think that we are absolutely at a defining moment for higher education. It’s very different from anything I’ve seen in my career,” said Pollack. “We have to really double our efforts to teach in more interactive ways.”

Actor, comedian, and author Rachel Dratch ’88 gave the second keynote address, mixing humor with serious reflection. “I don’t know what it was about 1972,” Dratch said, noting the start of coeducation as well as the Native American Studies Program and the Black Alumni of Dartmouth Association. She joked that it must have been “the alignment of the planets or something. It turned out to be a special year.”

Dratch, who also spoke as part of the “In the Spotlight” panel alongside fellow actors and comedians, noted the many achievements of Dartmouth women. While Greenways was a celebration of those achievements, she said, those accomplishments would have been more difficult without the women who first enrolled at Dartmouth in the early years of coeducation.

“This weekend is still a time to recognize the pioneers that came before us,” she said. “We want to hold up the trailblazers, who make anything seem achievable, to our younger counterparts.”

Dratch, like Richie, talked about the formative experience of the arts at Dartmouth.

“We were building ourselves, and we were allowed to do that,” she said. 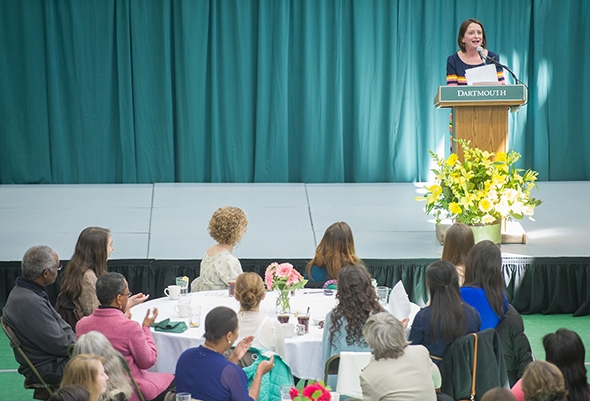 Actor and comedian Rachel Dratch ’88 delivers one of the keynote addresses. (Photo by Jeff Woodward)

Dratch noted that Dartmouth continues to build and evolve.

Dartmouth students of all ages shared those experiences throughout the weekend.

“I think it’s just great to see the love for Dartmouth from across generations,” said Tyler Melancon ’12, a presidential fellow.

“I had such a life-changing experience at Dartmouth and am so grateful to the College,” said Jane Scanlan Chapman ’81.

“I had to attend this special event to honor the women of Dartmouth. I am so proud of all of the women who presented at Dartmouth Greenways, they are such an inspiration.”

“I think it speaks to the strength of the passion for the school for so many alumni to come back,” said Kelsey Anspach ’15.

“I think creativity comes out of a love for something and a deep engagement with the material,” said Gordon-Reed. “It has to come from inside the individual.”

“Creativity, when it’s happening, is never transparent,” said Schuleit. “It is never a clear-cut path. It’s not fully teachable, either. It requires a sort of non-textbook attitude.” Schuleit was thankful for the opportunity to speak at Dartmouth. “It’s just amazing to be invited back,” she said.

Wagner was honored for her creativity before a screening of MAKERS, on which she was a producer and writer.

Wagner, introduced by Associate Dean of Faculty for International and Interdisciplinary Studies Lynn Higgins, founded her own independent production company, Turtle Rock Productions, Inc., and has produced a number of documentaries. Her work includes the Emmy award-winning Finding Lucy, a PBS American Masters film that documents the life and career of Lucille Ball.

Higgins, who also teaches film and literature and is the Edward Tuck Professor of French and Comparative Literature, said that watching parts of Wagner’s film made her cry.

“The stories are infuriating, tragic, at times hilarious, heartwarming, and inspiring. Among other things, they demonstrate that no one woman’s story is independent from other women’s stories. Those who weren’t there need to know about all this. And as I realized when I watched it, those of us who were there need to be reminded. Unsurprisingly, the project is already proving useful for teaching,” she said.

“It was an extraordinary project,” said Beattie. “Your presence here truly made everything as special as it could be.”

Chidi Anyadike ’13 contributed to this story.