For many Dartmouth students, Alaska may as well be halfway across the world. But for Meghan Topkok ’13, it is her family’s home. Topkok is a member of the Iñupiaq Tribe of northwestern Alaska, and has spent two leave terms working in Alaska on issues related to economic development and child welfare. 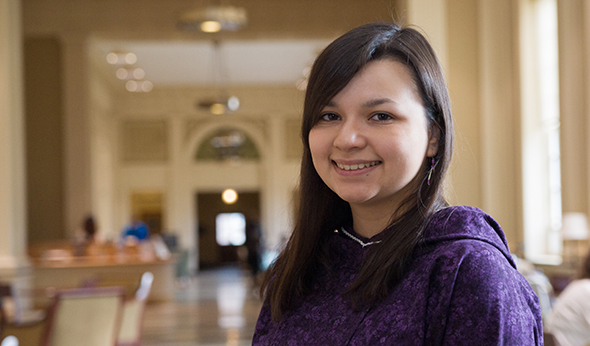 Meghan Topkok ’13, a member of the Iñupiaq Tribe of northwestern Alaska, is writing her senior thesis on the Indian Child Welfare Act. (Photo by Eli Burakian ’00)

A Native American Studies major and linguistics minor, she spent the summer of 2012 in Nome working at the Kawerak Beringia Center of Culture and Science and researching the Indian Child Welfare Act for her senior thesis. Two-thirds of the way through this intensive yearlong project, Topkok hopes her thesis will shed light on Alaska’s child welfare situation.

“I chose to write my thesis on the Indian Child Welfare Act, and specifically how it has been implemented in Alaska, because I wanted to take this opportunity to learn about my own family history and an issue that continues to affect thousands of children and families throughout Alaska,” says Topkok, whose grandmother was adopted by a non-Native family as part of the assimilationist policies of the 1950s and ’60s.

“While writing a thesis has probably been one of my most challenging academic endeavors, I feel it is has made me a more persuasive and effective writer,” Topkok says. “This process has been a test in endurance that is preparing me to better serve my tribe and people after graduation.”

In this video, Topkok talks about her research in Alaska, her Dartmouth experience, and how she stays connected to Iñupiaq traditions when she is in Hanover. 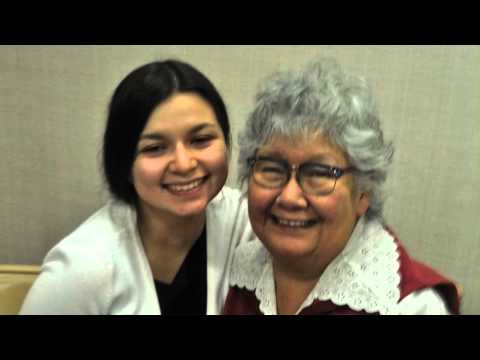 Her thesis adviser, N. Bruce Duthu ’80, the Samson Occom Professor of Native American Studies, says Topkok’s thesis allows her to write about a topic that is meaningful to her personally while giving her an opportunity to research larger issues that Alaska’s Native communities have faced.

“Meghan’s thesis project is significant in at least two respects,” says Duthu, who chairs the Native American Studies program. “First, it brings much needed attention to the challenges of restoring tribal sovereign authority over Indian child welfare decisions in Alaska. In other words, the potential exists for her research to be of great benefit at the community level. Secondly, her research is an example to other students about how to marry their intellectual endeavors and interests at Dartmouth with their commitment to their home communities.”

When Topkok visited Dartmouth on the Native Fly-In Program from Seal Rock, Oregon, where her family has lived for the last three years, the institution’s close-knit Native American community impressed her. And when she matriculated at Dartmouth, Topkok knew she wanted to be a part of the “long-standing and robust” Native American Studies program.

“Since I’ve come to Dartmouth, the faculty in the Native American Studies program have been very supportive of me and my academic endeavors,” Topkok says. “I couldn’t tell you the number of times professors have sat down with me over coffee or in office hours to go over papers and projects. Professor Duthu has been especially helpful in providing constructive feedback on my research.”

At Dartmouth, Topkok is active in several campus organizations. She serves as co-president of Native Americans at Dartmouth; heads up the Indigenous Living Languages group, which focuses on restoring the vitality of Native languages; is a co-organizer of Dartmouth’s Native Women’s Group; and is a member of Alpha Pi Omega sorority. She participates in the Native Dance Society, and also frequently engages in traditional dancing with fellow Iñupiaq Nicole Kanayurak ’13, who is from Barrow, Alaska. Additionally, Topkok spends time working with Savage Media, a student-run production group that brings voice to pertinent political issues through film, writing, and photography. And during her 2013 spring break, she participated in the Tucker Foundation’s Denver Alternative Spring Break trip and worked with community service organizations that serve the urban Indian population there.

Thanks to an Olga Gruss Lewin Post-Graduate Fellowship from Dartmouth’s William Jewett Tucker Foundation, Topkok will return to the Kawerak Beringia Center following her graduation in June 2013. She will be able to continue her work there for another year, which will include mentoring youths, teaching the Iñupiaq language to children as part of a language restoration project, and documenting oral traditions with community elders. Ultimately, Topkok plans to study federal Indian law and return to Alaska to work with tribal courts.