In a geological moment about 66 million years ago, something killed off almost all the dinosaurs and some 70 percent of all other species living on Earth. Only those dinosaurs related to birds appear to have survived. Most scientists agree that the culprit in this extinction was extraterrestrial, and the prevailing opinion has been that the party crasher was an asteroid. 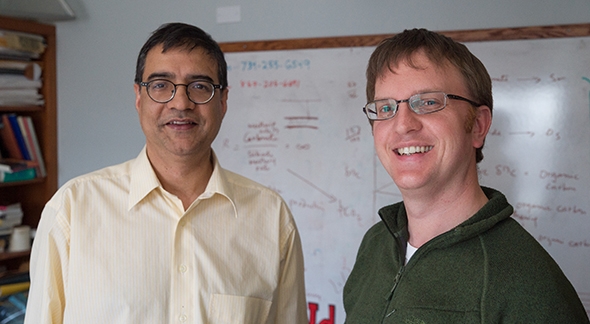 Professors Mukul Sharma (left) and Jason Moore of the Department of Earth Sciences revisit the departure of the dinosaurs. (Photo by Eli Burakian ’00)

Not so, say two Dartmouth researchers. Professors Jason Moore and Mukul Sharma of the Department of Earth Sciences favor another explanation, asserting that a high-velocity comet led to the demise of the dinosaurs.

Recently, asteroids have been in the headlines. On February 15, 2013, an asteroid exploded in the skies over Siberia. Later that day, another swept past the Earth in what some regard as a close call—just 17,000 miles away.

The asteroid impact theory of extinction began with discoveries by the late physicist and Nobel Laureate Luis Alvarez and his son, the geologist Walter Alvarez, a professor at the University of California, Berkeley. In 1980 they identified extremely high concentrations of the element iridium in a layer of rock known as the K-Pg (formerly called K-T) boundary. The layer marks the end of the Cretaceous period (abbreviated “K”), the epoch of the dinosaurs, and the beginning of the Paleogene period, with its notable absence of the large lizards.

While iridium is rare in the Earth’s crust, it is a common trace element in rocky space debris such as asteroids. Based on the elevated levels of iridium found worldwide in the boundary layer, the Alvarezes suggested that this signaled a major asteroid strike around the time of the K-Pg boundary—about 66 million years ago. Debate surrounded their theory until 2010, when a panel of 41 scientists published a report in support of the Alvarezes’ theory. The panel confirmed that a major asteroid impact had occurred at the K-Pg boundary and was responsible for mass extinctions.

The scientific community today looks to the deeply buried and partially submerged 110-mile wide Chicxulub crater in Mexico’s Yucatán as the place where the death-dealing asteroid landed. The 66-million-year age of Chicxulub, discovered in 1990, coincides with the KT boundary, leading to the conclusion that what caused the crater also wiped out the dinosaurs. 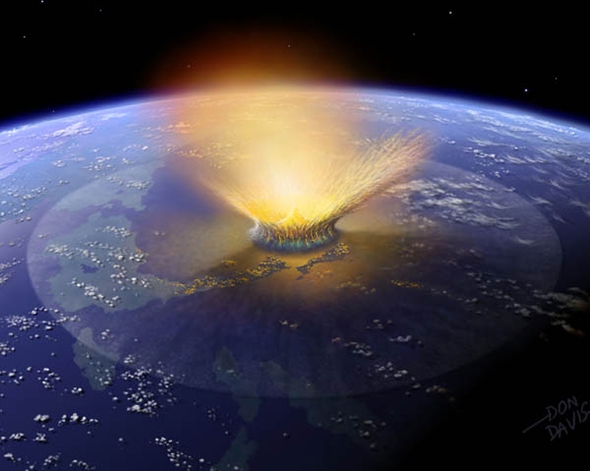 Moore and Sharma do agree with fellow scientists that Chicxulub was the impact zone, but dispute the characterization of the object from space as an asteroid. In a paper presented to the 44th Lunar and Planetary Conference on March 22, 2013, they described their somewhat controversial findings.

Moore notes that in the past geochemists toiled away, isolated from their geophysicist colleagues, each focused on his or her particular area of expertise. “There hadn’t been a concerted synthesis of all the data from these two camps,” says Moore. “That’s what we’ve tried to do.”

The Dartmouth duo compiled all the published data on iridium from the K-Pg boundary. They also included the K-Pg data on osmium—another element common in space rock. In sifting through all this they found a wide range of variability, so consequently kept only the figures they demonstrated to be most reliable. “Because we are bringing a fresh set of eyes into this field, we feel our decisions are objective and unbiased,” says Sharma.

For example, they deleted data drawn from deep ocean cores where there were very high amounts of iridium. “We discovered that even then there was a huge variation. It was much worse in the oceans than on the continents,” Sharma said. “We figured out that the oceanic variations are likely caused by preferential concentration of iridium bearing minerals in marine sediments.” 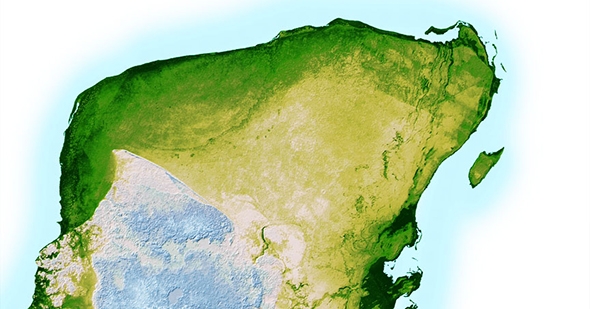 An image of Mexico’s Yucatan Peninsula shows a faint semicircle in the northwest, marking the underground portion of the Chicxulub impact crater, with the rest of the crater concealed beneath the Gulf of Mexico. The original image was taken from Space Shuttle Endeavour, February 2000. (Photo courtesy of NASA/JPL)

In the final analysis, the overall trace element levels were much lower than those that scientists had been using for decades. The low level weakened the argument for an asteroid impact explanation. However, a comet explanation reconciles the conflicting evidence of a huge impact crater with the revised, lower iridium/osmium levels at the K-Pg boundary.

“We are proposing a comet because that conclusion hits a ‘sweet spot.’ Comets have a lower percentage of iridium and osmium than asteroids, relative to their mass, yet a high-velocity comet would have sufficient energy to create a 110-mile-wide crater,” says Moore. “Comets travel much faster than asteroids, so they have more energy on impact, which, in combination with their being partially ice, means they are not contributing as much iridium or osmium.”

Moore attributes much of the early resistance to a comet-impact theory to a lack of knowledge about comets in general. “We weren’t certain whether they were dirty snowballs or icy dirt balls,” he says. “Today, we are inclined toward the icy dirt ball description.”

Comet composition and physical structure were unknown, but with the advent of NASA missions to comets like “Deep Impact” in 2010, a much larger database has been developed. “We now have a much better understanding of what a comet may be like and it is still consistent with the K-Pg boundary data we are seeing,” Moore adds.

Sharma says that, “In synthesizing the data generated by two very disparate fields of research—geochemistry and geophysics—we are now 99.9 percent sure that what we are dealing with is a 66-million-year-old comet impact—not an asteroid.”