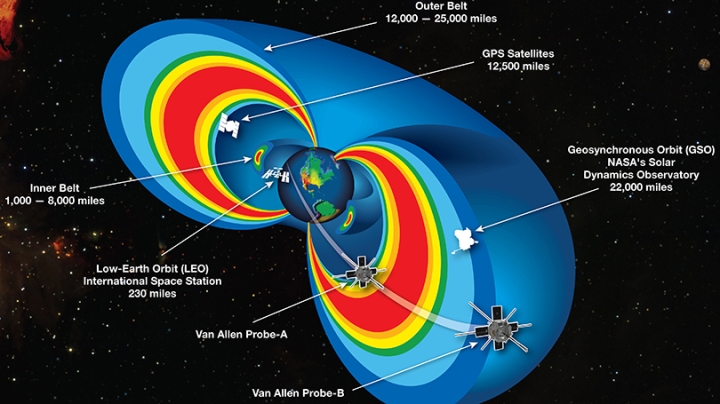 An artist’s rendition of the Van Allen Belts shows the relative position of the probes and other spacecraft. (Photo courtesy of NASA)
4/15/2013
Body

They say that it's sunspots. That is the typical explanation you hear when your television goes on the fritz or your cellphone quits working or the GPS in your car tells you you're driving in the middle of the ocean. Certainly, the sun is at the root of your problem, but it's not simply the sunspots. It's also the effect that all kinds of solar activity have on the Earth's magnetosphere.

Associate Professor Robyn Millan connects the electronic cables on a balloon payload, enabling transmission of flight data to the satellite modem for downlink to the ground. (Photo by Eli Burakian)

Yes, Virginia, the Earth has a magnetosphere—which is like a giant magnet with lines of force surrounding our planet. This magnetic field waxes and wanes with surges of activity on the sun, activities that include sunspots as well as more dramatic behavior. Massive bursts of solar wind and magnetic force released by the sun as shock waves into space can wreak havoc on our magnetic environment.

Dartmouth physicists Mary Hudson and Robyn Millan study what is going on in the magnetosphere, specifically the Van Allen radiation belts that reside there. The belts are giant concentric layers of charged particles held in place by the Earth's magnetic field. Changes in this magnetized radiation due to solar activity can certainly disrupt satellite-based navigation and communication systems, but they can also be deadly to astronauts doing "space walks."

"We have become more dependent on space technology, far more than even a decade ago," says Hudson, a professor in the Department of Physics and Astronomy. "We take for granted services that can be disrupted by space weather events. If we can provide better forecasting, as we do for regular weather, then people operating the satellite systems and manned spacecraft will be able to plan accordingly."

Space physicist Mary Hudson is a member of a multi-institutional team that governs the orbiting Van Allen Probes. (Photo by Eli Burakian)

In the quest for this predictive capability, the team Hudson is on studies the Van Allen belts through recently deployed spacecraft embedded in the belts, tens of thousands of miles above the Earth. Millan, in a complementary effort, takes a bottom-up perspective, using instrument-laden balloons in assessing the particles that rain down from above.

First identified in 1958 by University of Iowa physicist James Van Allen and named in his honor, the donut-shaped belts change in form and intensity based on fluctuations in "space weather"—the conditions in the near-Earth environment that respond to cosmic rays and the solar wind particles released by the sun. The belts are generally seen as two separate rings, with an outer ring orbiting at a distance of some 8,000 to 40,000 miles above Earth, and an inner band at about 600 to 3,700 miles.

Hudson and her colleagues at other institutions are responsible for the twin NASA Van Allen Probes, a pair of satellites launched together into the radiation belts on August 30, 2012. Flying in nearly identical eccentric orbits circling the Earth every nine hours, they cover the entire radiation belt region from a few hundred miles up to nearly 20,000 miles. The probes were built by and are managed by the Johns Hopkins University Applied Physics Laboratory in Laurel, Md.

Shortly after the probes were launched, they made news with the discovery of a short-lived third radiation belt sandwiched between the two known belts. Hudson says that its appearance and subsequent disappearance are linked to a period of intense solar activity. While the event came as a surprise to Van Allen Probe scientists, Hudson expects that the detailed measurements by the new satellites will enable observation of similar events over the next few years.

"It was caused by coronal mass ejections—those explosions of solar material— so I expect to see other examples like this," she says. "But I think we didn’t previously have the kind of resolution that the Van Allen Probes' instruments provide. So it's not that it's a unique event, but it's our ability to much more clearly see the formation and then its complete disruption."

In contrast to Hudson's high-altitude work, Robyn Millan conducts her investigations at about 125,000 feet, far below the Van Allen Probes. Also sponsored by NASA, Millan's project is conducted in support of the Van Allen Probes mission. It is called BARREL but it's all about balloons—not kegs—carrying instrument packages. BARREL is an acronym for Balloon Array for Radiation belt Relativistic Electron Losses.

Millan, an associate professor in the Department of Physics and Astronomy, explains that the two Van Allen Probes are measuring particle, electric and magnetic fields. This is basically everything in the radiation belt environment, including the electrons, which descend following the Earth's magnetic field lines that converge at the poles. This is why the balloons are launched from Antarctica, where some of the best observations can be made.

As the falling electrons collide with the atmosphere, they produce X-rays and that is what the balloon instruments are actually recording. "We are measuring those atmospheric losses and trying to understand how the particles are getting kicked into the atmosphere," she says. "Our main focus has been really on the processes that are occurring out in space. Particles (in the Van Allen belts) never reach the ground, so they don't constitute a health threat. Even the X-rays get absorbed, which is why we have to go to balloon altitudes to see them."

The most recent balloon campaign was conducted in January through mid-February—during the "Antarctic summer." Twenty balloons were launched sequentially, "drifting like beads on a chain in the winds that circle the Antarctic," as Millan describes it.

"The whole campaign she pulled off was really spectacular," says Hudson. "NASA and the scientists on the Van Allen Probes project are very excited about Robyn's $10 million experiment because it is the only way to measure the precipitation that is associated with this half-billion-dollar mission."