Spring is under way and with it, the award season for Dartmouth students. Three juniors were recently recognized by national foundations for outstanding academic achievement.

“These three students are extraordinary examples of the deep academic engagement that is characteristic of Dartmouth’s student body,” says Kristin O’Rourke, assistant dean for scholarship advising. “We are delighted to see their hard work and commitment recognized.” 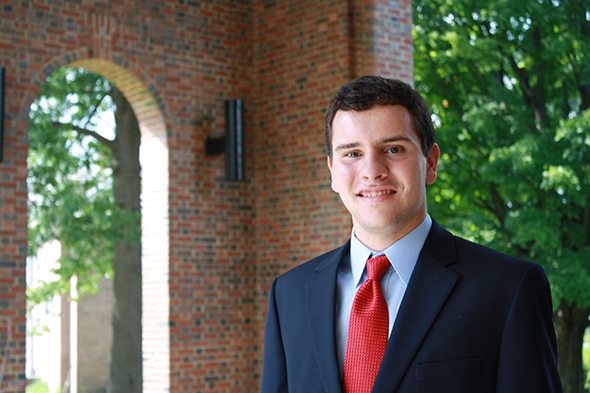 Earlier this week, Brandon DeBot was asked to meet with President Carol L. Folt. DeBot had been told that faculty members nominated him to provide student input on a President’s Office project.

Instead, President Folt told DeBot that he is one of 62 winners of the Truman Scholarship.

“I was immediately overwhelmed with excitement,” says DeBot. “It hasn’t completely sunk in yet, but I’m extremely grateful to the Truman Foundation, Dartmouth, and everyone who helped me get to this point.”

“The programs at the Rockefeller Center have been really influential in my experience,” says Debot. “I’ve gained both leadership and research background and the real world experience to go with that.”

The government major is a member of the tennis team, a James O. Freedman Presidential Scholar, and has worked as an intern for the White House National Economic Council. He has been a Rufus Choate Scholar and has interned at The Charles Group, LLC through the Nelson A. Rockefeller Center for Public Policy and  Social Sciences First-Year Fellows Program.

The Harry S. Truman Scholarship Foundation selects exceptional college juniors who are committed to public service careers in fields such as government, education or nonprofits. Truman Scholars are given financial support for graduate studies, leadership training or fellowships. DeBot was selected from a group of 629 applicants.

“This is an incredible opportunity for me,” he says. “It means a lot in terms of going on to graduate school and pursuing a career in public policy.”

DeBot wants to work in Washington, D.C., perhaps for a think tank working on federal fiscal policy. Debot has worked as a research assistant for Assistant Professor of Government Brendan Nyhan and as a member of the Policy Research Shop.

He says he feels especially compelled to work in fiscal policy because it will have a significant effect on his generation. “How we see ourselves as a society is reflected in the priorities of the federal budget,” says DeBot. “I think there is a lot of common ground in Washington, and I’d like to help bridge that gap.” 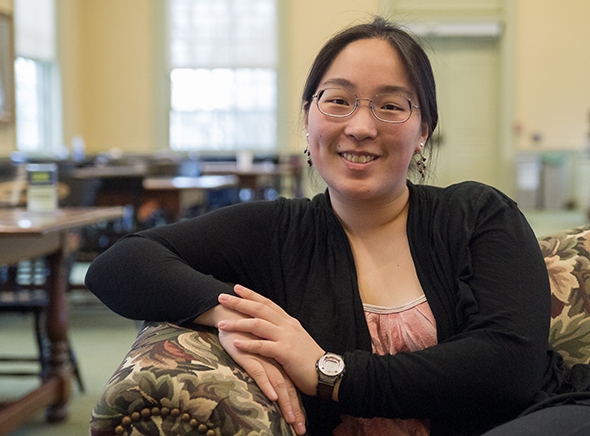 Serena Liu ’14, a Goldwater Scholarship winner, hopes to pursue a PhD in the sciences. (Photo by Eli Burakian ’00)

Serena Liu has added a Goldwater Scholarship to her list of accolades.

“I am really honored. I kind of feel this giddy joy,” she says with a laugh. “It’s more about the recognition than the money.”

The junior from Bellevue, Wash., has already had plenty of recognition: She’s been a Rufus Choate Scholar twice; earned the Phi Beta Kappa Sophomore Prize, given to the Dartmouth student with the highest grade point average after five terms; and has earned nine academic citations in six different disciplines. She also finds time to work as a teaching assistant in the Claflin Jewelry Studio and to sing in the Handel Society.

So how does she do it?

“I certainly could not have done it without my amazing professors,” says Liu, who is double majoring in biology and economics. “It’s really valuable to get to interact with experts in their field.”

The Barry Goldwater Scholarship and Excellence in Education Program began in 1986 to honor former Sen. Barry Goldwater. Goldwater served in the military and public service for more than half a century. The scholarship strives to encourage excellence in science and mathematics; Liu is one of 271 Goldwater recipients this year from a pool of 1,107 applicants.

On campus, Liu works in the lab of Thomas Jack, associate professor of biological sciences, and has worked as a laboratory teaching assistant for two biology courses. In 2012, she was named the biology department’s winner of the Francis L. Town Scientific Prize, awarded to a junior in each science department at Dartmouth.

Liu says she plans to pursue a PhD in science, perhaps genetics.

When asked what she hopes to be doing in 10 years, she pauses.

“As long as I’m out there exploring interesting problems and trying to find new solutions,” she says, “I’ll be satisfied.”

Bonnell-Hall, who is from Idaho, has been awarded a 2013 Udall Scholarship honorable-mention.

An environmental studies major, Bonnell-Hall has served as the advertising chair for the Pow-Wow committee and the co-president of the planning committee for the All-Ivy Native Summit. He has also been a member of the Center for Environmental Leadership Training and has been a Dartmouth Outing Club First-Year Trip leader.

The Morris K. Udall and Stewart L. Udall Foundation was established in 1992 to honor Morris Udall’s 30 years of service in the U.S. House of Representatives. In 2009, Congress passed legislation to add Morris’ older brother and former Secretary of the Interior Stewart Udall’s name to the foundation. From a pool of 488 applicants, Bonnell-Hall is one of 50 honorable mentions for the Udall Scholarship, which also had 50 winners of the award.

During the past four summers, Bonnell-Hall has researched the ecosystem of Coeur d’Alene Lake and worked to protect its wildlife and environment. After graduating, he would like to work to promote sustainability in Coeur d’Alene and nearby communities.

“I feel honored to be recognized by such a prestigious organization,” says Bonnell-Hall, “and inspired to continue on my path towards making a positive difference in the world.”