A Dog Has Its Day

Read the full story by Amos Esty published in the Winter 2013 issue of Dartmouth Medicine.

In the early fall of 2011, the Orndorff family received some bad news. Eleven-year-old Jenny, a lively, adorable Schnauzer, had cancer. 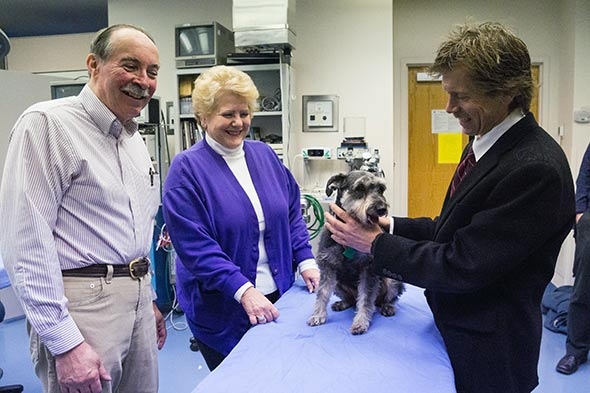 P. Jack Hoopes, professor of surgery and of medicine at the Geisel School of Medicine, talks with Sam and Sandra Orndorff about their dog Jenny’s progress. (Photo by Eli Burakian ’00)

The outlook was bleak. Jenny’s veterinarian had spotted a large, rapidly growing tumor in Jenny’s mouth. The vet removed as much of the tumor as possible, but he warned Sam and Sandra Orndorff that it was likely that some cancer cells remained.

Unfortunately, he was right. Before long, the tumor had regrown and threatened to spread to Jenny’s nose and surrounding bones. “We were really shocked,” Sandra says.

The Orndorffs traveled to see specialists in upstate New York, but again the news was disheartening. Surgery was one option, but to be sure that all of the tumor was resected, the surgeon would have to remove part of Jenny’s nose, leaving her disfigured. Radiation was another option, but the specialists said that it would take a course of 16 treatments, and even then there was no guarantee that the cancer wouldn’t return.

Then Jenny’s vet told the Orndorffs about another possibility. As part of the Dartmouth Center of Cancer Nanotechnology Excellence directed by faculty at Thayer School of Engineering, P. Jack Hoopes, a Geisel School of Medicine professor of surgery and of medicine, and colleagues at Geisel and Dartmouth-Hitchcock were starting a clinical trial to test the effectiveness of an experimental treatment using magnetic nanoparticles. The trial would enroll dogs who had developed specific kinds of oral tumors, and Jenny’s cancer fit the description the researchers were looking for.

The Orndorffs could do nothing, accepting that Jenny had already had a long and happy life. They could choose surgery or radiation, which might rid Jenny of cancer at least temporarily but would come with a cost in quality of life. Or they could allow researchers to test an unproven treatment on Jenny, a dog they had doted on since she was just a few weeks old, with no guarantee that it would work.

The decision was easy. Jenny became the first dog enrolled in the trial. “It was just perfect timing,” Sandra says.