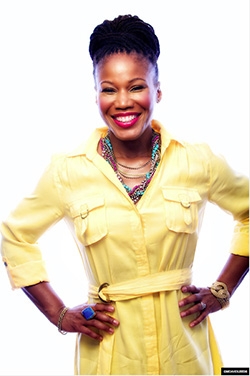 “No community should be saddled with more environmental burdens and less environmental benefits than any other,” said Carter. (Courtesy of Majora Carter)

“Majora Carter has been a pioneering and inspirational leader on projects that show how sustainability connects environmental restoration to social mobility and economic prosperity. We’re delighted to have Majora share her creative ideas with the Dartmouth community,” says Anne Kapuscinski, the Sherman Fairchild Distinguished Professor of Sustainability Sciences and chair of the Environmental Studies Program.

Carter founded Sustainable South Bronx, which she led from 2001 to 2008. She has developed innovative and award-winning green public spaces, and spearheaded policy and training and placement systems that support “green collar jobs.” It was “Carter’s recognition of the link between environmental improvement and economic revitalization set the stage for her national prominence,” The New York Times wrote in 2008.

Goldman Sachs named her one of 2012’s “100 Most Intriguing Entrepreneurs.”  A 1988 graduate of Wesleyan University, Carter is known for her interdisciplinary approach to problems and for connecting seemingly unrelated issues such as air pollution and diabetes.

“I’m excited about Majora Carter’s visit because she’s an inspiring voice who is known for drawing connections between social, economic, and ecological issues that we as students are passionate about addressing,” says Franklin. “I think a lot of different student groups will be coming out to hear Majora Carter, and it will be a great opportunity to merge our passions and see that we’re all working toward the same goals.”

Dartmouth’s Environmental Studies Program was founded in 1970. The interdisciplinary program’s mission is to investigate and teach about interconnected natural and social systems and to search for solutions of complex environmental problems. The George Link Jr. Environmental Awareness Lecture was established in 1993 “in recognition of the fact that a heightened awareness of environmental issues is integral to a modern liberal arts education.”

Recent Link lecturers have included musician and activist Johnny Clegg and Laurie Marker, a well-known expert on conservation of cheetahs.