An Opportunity to Explore

This story was originally published in the Dartmouth College Fund’s spring 2013 issue of GREEN at Dartmouth.

Jordan Keehn ’15, from Gardner, Kan., is the first in his family to go to college. Keehn came to Dartmouth expecting to major in biology. Then he took “Chinese I.” 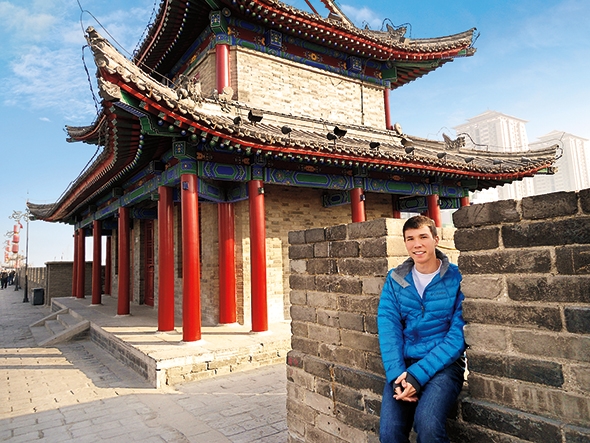 Keehn talked to GREEN at Dartmouth about his Language Study Abroad (LSA) experience in China:

I had planned to attend a state school, but one of my teachers encouraged me to look at Dartmouth, and I liked the undergraduate focus and the off-campus programs. When I visited, I met with a biology professor who was super passionate and very welcoming. That cemented it for me.

I intended to major in biology, but freshman fall I took Chinese with Professor Hua-yuan Li Mowry and absolutely loved it. This fall I went to China on the LSA. I had never been out of the country before, not even to Canada! It was hard at first, but halfway through I realized that my Chinese was getting good.

I was surprised by how diverse China is. We saw the desert, and I rode a camel—not the first thing you think of when you think of China. And we experienced a range of cultures that most Americans don’t realize are there. The most interesting thing I ate was yak meat (I was skeptical, but I actually liked it a lot).

Professor Mowry helped start the Dartmouth program in Beijing 30 years ago, but this was her last year running the trip. She was excited when I talked about becoming a Chinese major. She wants me to write a thesis, which I had never thought about. I’m still interested in medical school, but I’m taking Dartmouth as an opportunity to explore. I might try to take a gap year and go back to China to teach English.