Even as control of the New Hampshire Statehouse has shifted between Democrats and Republicans, the work of the Nelson A. Rockefeller Center’s Policy Research Shop (PRS) has remained a welcome source of thorough, non-partisan research for lawmakers on both sides of the aisle. 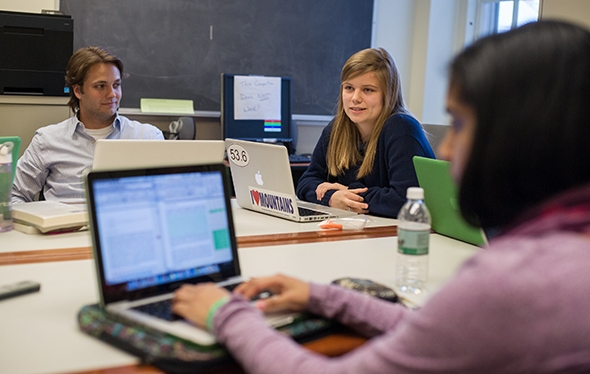 Austin Goldberg ’13 and Aislinn McLaughlin ’14 work on policy briefs at a meeting of Policy Research Shop students at The Nelson A. Rockefeller Center for Public Policy in preparation for testimony before the New Hampshire Senate Judiciary Committee. (Photo by Eli Burakian ’00)

Rep. Laurie Harding, a Democrat from Lebanon, has worked with the Policy Research Shop for the last five years as a liaison to connect the group with committees and lawmakers seeking policy research reports. Policymakers are happy to work with the students, she says.

“I think the learning experience is very important. I think it is important for students to learn about how policy is made and also to see what their role can be in the policy process,” Harding says.

Students from the PRS testified before the New Hampshire Senate Judiciary Committee on Tuesday, April 2, presenting two policy papers, one assessing the juvenile justice system in New Hampshire and a second looking at the effectiveness of drug courts in New Hampshire, Vermont and Maine.

The papers represent the 100th and 101st projects by the Policy Research Shop, overseen from its inception eight years ago by Professor Ronald G. Shaiko, senior fellow and associate director of curricular programs at The Nelson A. Rockefeller Center for Public Policy and the Social Sciences.

“To date, well over 200 Dartmouth undergraduates have participated in the PRS.  Students have come away from the experience with a firmer grasp of the policymaking process at the state and local levels of government and, more importantly, their important role in that process,” Shaiko says.

“The Policy Research Shop offers students the opportunity to engage with the public policy process by applying the research skills they learn in the classroom to the world beyond Dartmouth,” he says.

”The Rockefeller Center’s dedication to fostering a commitment to the ideals of public service and informed public policy debate in our future leaders at Dartmouth College is a vital contribution to our nation and to the future of democracy. I congratulate the student policy researchers, Ron Shaiko and Rockefeller Center Director Andrew Samwick on this significant milestone,” she says.

The work of developing non-partisan and objective briefs for local and state policy makers pushes students to consider many sides of an issue while confronting the dynamics of the political process, says Margaret Post, a post-doctoral fellow at the Rockefeller Center who is mentoring the juvenile justice policy team.

“They really have to wrestle with that because students are passionate about certain topics—they have very strong feelings,” Post says. “These kinds of experiences train students not only to be engaged as citizens but to be engaged in a way that is intellectually rigorous. That makes a difference in their capacity to be engaged citizens.”

Grace Hart ’13, who testified on behalf of the juvenile justice team before the Senate Judiciary Committee on April 2, says her experience with the program has been “eye opening.”

Hart says real world research has broadened her experience. On an earlier project, she and other students visited the Grafton County Jail in North Haverhill, N.H.

“We were reading about what facilities are like, what they are about, and it was all really abstract. Then we went and saw what a prison was like, and I don’t think any of us had been to one before. It is hard to wrap your head around,” she says.

Austin Goldberg ’13, along with Adam Nasser ’15 and Portia Schultz ’15, presented the brief on “The Adult Drug Courts of New Hampshire, Vermont and Maine: An Analysis of Effectiveness and Barriers to Expansion.” A fourth team member, Jaya Batra ’13, could not make it to Concord. In addition to data analysis, interviews, and research, the team’s work included an assessment of how the political perception about diverting drug defendants as lawmakers being “lax on crime” could influence the debate.

Goldberg, who worked in the Washington, D.C., office of Sen. Mark Kirk, an Illinois Republican, last winter through internship funding provided by the Rockefeller Center, says that the focus on non-partisan work at the center is “refreshing” compared with the often-emotional politics more common in social settings in school.

Matthew Cravens, a postdoctoral fellow and faculty mentor for the drug courts policy team, says that the shop’s reputation as impartial and thorough has kept PRS’ work in good standing with lawmakers of all political stripes.

“Ron has really protected the brand,” Cravens says, and that has meant lawmakers are happy to turn to the PRS for policy research—regardless of the politics of the day. And this approach to public policy will serve graduates and the broader political culture very well in the future, he says.

The Policy Research Shop is currently supported by a three-year, $750,000 grant from the Fund for the Improvement of Post-secondary Education (FIPSE) at the U.S. Department of Education. The PRS has also been supported by grants from the Ford Foundation and the Surdna Foundation.