Susannah Heschel, the Eli Black Professor of Jewish Studies in Dartmouth’s Department of Religion, and Cleopatra Mathis, the Frederick Sessions Beebe ’35 Professor of the Art of Writing in the Department of English, are among 175 scholars in the United States and Canada who have been awarded 2013 fellowships from the John Simon Guggenheim Memorial Foundation. 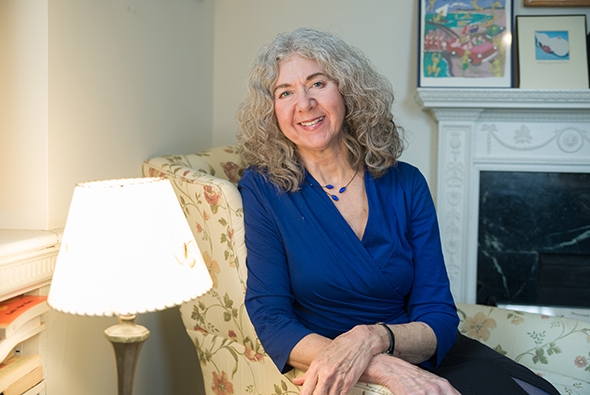 Cleopatra Mathis, the Frederick Sessions Beebe ’35 Professor of the Art of Writing in the Department of English, plans to use the fellowship award to travel to Turkey and the Greek island of Mitilene to write about her family history. (Photo by Eli Burakian ’00)

The Guggenheims are frequently characterized as “midcareer” awards. Heschel and Mathis were selected from a group of nearly 3,000 applicants “on the basis of prior achievement and exceptional promise,” according to the foundation’s website.

Adrian Randolph, associate dean of the faculty for the arts and humanities, says he was delighted that the Guggenheim Foundation chose to honor two of Dartmouth’s esteemed teacher-scholars.

“Susannah Heschel’s innovative work offers a prismatic account of religion. In her book The Aryan Jesus she described theology in Germany under National Socialism and in her recent work she considers, among other things, Jewish scholarship on Islam. Heschel peers with curiosity and intensity at religious traditions refracted through the lenses of politics, belief, and, most importantly, theology. The Guggenheim Fellowship honors what she has achieved and will support her groundbreaking future research. 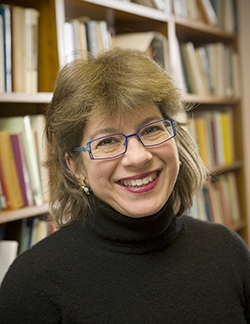 Susannah Heschel, the Eli Black Professor of Jewish Studies in Dartmouth’s Department of Religion, will use the fellowship to continue her research for a book about the history of Islamic studies, an academic field that a number of Jewish scholars helped to shape in the 19th century. (Photo by Joe Mehling ’69)

“And Cleopatra Mathis crafts poems of subtle might. Her voice is personal, descriptive, and direct. Her recent Book of Dog, which appeared earlier this year, erupts quite clearly from experience and, in sharing bright insights, joins word and emotion with searing directness. I am thrilled that the next stage of her creative journey will be fueled by the Guggenheim Foundation.”

Heschel, who also has appointments in the Jewish Studies and Women’s and Gender Studies programs, will use the fellowship to continue research for a book about the history of Islamic studies, an academic field that a number of Jewish scholars helped shape in the 19th century.

“I’m looking at the history of this Jewish scholarship in Europe from the 1830s and going through the 1940s,” says Heschel, who will engage in archival research in Europe, India, and Israel. “I’m interested in what Jews were writing about and their depictions of Islam, which were actually very positive.”

Mathis, who has published seven books of poems and founded Dartmouth’s creative writing program in 1982, plans to use the Guggenheim fellowship to travel and write. She intends to visit places that have inspired her writing, such as Provincetown, Mass., where she enjoys working in the dune shacks in the Cape Cod National Seashore, as well as places that are meaningful to her family. These include Matamadou, a village on the Greek island of Mitilene, where her grandmother’s family lived prior to 1832, and Ayvali, Turkey, where her grandmother’s family lived for three generations before fleeing the Armenian genocide.

“The genocide of the Armenians and along with it the killing of the Greeks living in Turkey is a huge subject for me,” says Mathis, who was born and raised in Ruston, La., and is of Greek and Cherokee descent. "My grandmother was 21 years old, newly arrived in America, the only survivor in her family. She was a Greek who grew up in a foreign country: It was her family’s adopted country, Turkey, which then killed her family. She became a refugee in Greece and then an immigrant to the U.S. I don’t know what form that family history will take, but I’d like to try to write about it.”

Heschel began teaching at Dartmouth in the fall of 1998. She is the daughter of renowned Jewish theologian Rabbi Abraham Joshua Heschel, who actively supported Martin Luther King Jr. during the Civil Rights movement. She chose a career in academia because, she says, her father “made scholarship seem like the most interesting thing in the world. He was a great intellectual, someone who studied day and night. He was committed to his scholarship and the life of the mind. He was also someone who thought critically, so he had a sense of intellectual dissatisfaction, which I think is very important. I think of being a scholar as a vocation, just like a nun or a monk. It’s the devotion of your whole life and your whole being, all day, every day.”

Her scholarship focuses on Jewish-Christian relations in Germany during the 19th and 20th centuries, the history of biblical scholarship, and the Wissenschaft des Judentums. In addition to The Aryan Jesus: Christian Theologians and the Bible in Nazi Germany (Princeton University Press), she wrote Abraham Geiger and the Jewish Jesus (University of Chicago Press), which won a National Jewish Book Award. She has served as visiting professor at the Universities of Cape Town, Frankfurt, and Edinburgh, and at Princeton University, and is the recipient of four honorary doctorates.

Heschel’s research has been supported by grants from the Ford Foundation, a year at the National Humanities Center, and a Carnegie Foundation grant in Islamic Studies. She has also held a yearlong fellowship at the Wissenschaftkolleg zu Berlin, and last week was awarded one of the inaugural Peter J. Gomes STB ’68 Memorial Honors by the Harvard Divinity School, from which she earned a master’s of theological studies.

Mathis’ seven poetry collections include Book of Dog, which was published in January, and White Sea (2005), both published by Sarabande Books; and Aerial View of Louisiana (1979), The Bottom Land (1983), The Center for Cold Weather (1989), Guardian (1995) and What to Tip the Boatman (2001), all published by Sheep Meadow Press.

Her work has appeared in many anthologies, textbooks, magazines, and journals, including The Best American Poetry 2009, New Yorker, Poetry, and The Extraordinary Tide: Poems by American Women. She has been awarded two National Endowment for the Arts grants, two Pushcart Prizes, the Peter Lavin Award from the Academy of American Poets, and a poetry fellowship at the Fine Arts Work Center in Provincetown, among other honors.

When asked what advice she gives her students, Mathis says, “Keep a record. Time seems to stretch out endlessly when you’re this age and it’s not endless. And you’re going to forget most of it. You’re going to forget who you were. So pay attention to everything going on around you and write it down. I think the biggest part of being a good writer is paying attention and going as deep into yourself as possible.”

Mathis will be giving several readings of Book of Dog in the coming months, including at the Quechee Library in Quechee, Vt., on April 23.