In the midst of a whirlwind day filled with conversations about balancing work and family, Anne-Marie Slaughter sits down with Dartmouth Now for a video interview. Before she can get a microphone on, her phone rings.

“Hi sweetie,” she says, pausing. She listens to the caller. “I wish I could be there,” she says.

After a few moments, she hangs up.

The caller was one of her two teenage sons. Today, both Slaughter and her husband had to leave town, and their kids at home, because of work commitments. The Princeton professor, who has become a voice for work-life balance since her controversial article in The Atlantic, “Why Women Still Can’t Have it All,” says she still struggles to juggle her career and family life.

“I actually think it’s up to universities like Dartmouth or like Princeton to start emphasizing from the moment a freshman sets foot on the campus that downtime is important, time with friends is important,” says Slaughter. “The nurturing and cultivation of human relationships is as important as whatever it is you think is going to add an extra line to your resume.” 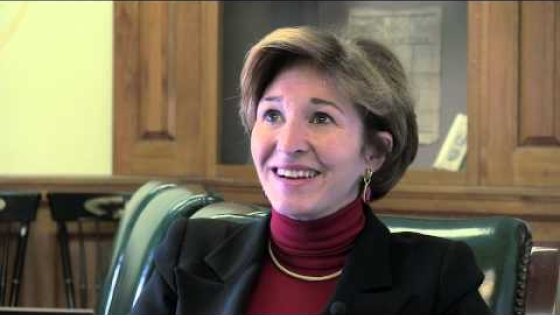 While on campus, Slaughter gave a talk before a packed crowd at the Tuck School of Business. The same day, the New America Foundation announced Slaughter would be the foundation’s next president. As she takes on her new role, she will transition to emeritus status at Princeton.

Slaughter is the most recent speaker in the “Leading Voices in Higher Education” lecture series.