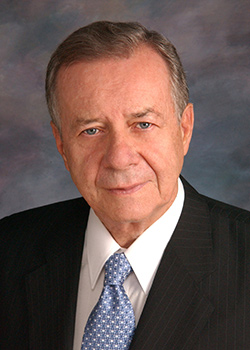 The gift will endow the Frank J. Guarini Institute for International Education, encompassing the Office of Off-Campus Programs and allowing Dartmouth to strengthen the strategic oversight, coordination, and content of existing and new off-campus study opportunities.

Guarini’s gift will expand Dartmouth’s programs in under-represented areas of the world, introduce programs on an experimental basis in response to changing global circumstances and student interest, and integrate off-campus experiences more fully into the on-campus curriculum. The gift will also endow the associate deanship in international and interdisciplinary studies, a position devoted to creating a global and interdisciplinary learning environment.

“Frank Guarini is a true citizen of the world whose life and career are devoted to public service and international understanding,“ says Interim President Carol Folt. ”His gift will have an impact on the educational experience of Dartmouth students for generations. Dartmouth has a long and proud history as a leader in encouraging students to cross boundaries and explore different cultures, languages, values, and ways of knowing.  We are committed to providing our students with learning opportunities that make engagement with other cultures and societies real and immediate.“

Dartmouth has been at the vanguard of international education for decades, creating its first study abroad program in the late 1950s, and ranks second among Ivy League schools and eighth among all U.S. doctorate-granting institutions for study abroad participation, according to the Institute of International Education’s 2010-2011 “Open Doors” report. Nearly 60 percent of today’s Dartmouth students take part in 43 foreign study programs in 24 countries.

Guarini, whose experience on the international stage began with his Navy service in World War II, says he intends the gift to help students develop a global perspective. “I hope this endowment will enable all Dartmouth students to experience the benefits of studying and living abroad,” he says. “There is no substitute for living in another country to expand one’s world view and gain an appreciation for the interplay of cultures.”

“The Guarini Institute will allow us to ensure a range of global experiences for our students and incorporate the learning that takes place into the classroom dialogue back in Hanover,” says Dean of the Faculty of Arts & Sciences Mike Mastanduno. “The Guarini Institute reinforces Dartmouth’s goal of preparing students to thrive in an intellectually and culturally diverse world.”

Guarini received his JD and LLM from New York University School of Law, and went on to serve in the New Jersey State Senate for two terms and in the U.S. House of Representatives for seven, championing legislative reform and focusing on international trade. He served as a delegate to the North Atlantic Treaty Organization in London, and was appointed by President Clinton to serve as U.S. representative to the General Assembly of the United Nations.