Representatives from five colleges spoke in Hanover April 26 to share innovative strategies each developed as participants in a Dartmouth-initiated, nationwide collaborative of 32 schools seeking to reduce harms from high-risk alcohol consumption on college campuses in the United States. 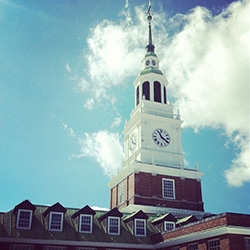 Presenters from Dartmouth, the University of New Hampshire, Brown University, the University of Vermont, and SUNY-Stony Brook discussed the emerging lessons of the National College Health Improvement Project (NCHIP) and the unique programs developed on each campus to tackle high-risk drinking as the learning collaborative approaches the end of the first two-year initiative next month. The Dartmouth Center on Addiction Recovery and Care sponsored the symposium.

Former Dartmouth President Jim Yong Kim founded the initiative in 2011 to confront the dangers of high-risk drinking at Dartmouth and on college campuses across the nation. Tricia Lanter, co-director of NCHIP and an emergency room physician at Dartmouth-Hitchcock Medical Center, presented an overview of NCHIP during the meeting.

An estimated 1,800 college students die each year from incidents related to alcohol, according to estimates compiled by the National Institute for Alcohol Abuse and Alcoholism. Lanter, as an emergency room physician, saw Dartmouth students who were hospitalized for alcohol incidents, and she said the numbers troubled Kim.

Kim told her it was “the middle of the night phone call he feared the most,” she says.

As the learning collaborative was organizing, Kim set an ambitious goal for the Dartmouth program: “Within three years, eliminate DHMC emergency department visits for blood alcohol counts greater than .25 by eradicating this level of intoxication from our campus community.”

The symposium also included representatives from regional substance abuse treatment programs, community groups, and academic institutions not yet involved in the initiative. As NCHIP prepares a second round of the collaborative, the program is actively recruiting new institutions. More information is available at www.nchip.org.

In addition, many of the 32 colleges involved in the first round of NCHIP will continue into a second, one-year phase, that will involve the collaborative of new colleges, says Lanter.

NCHIP will roll out the Wave 2 Learning Collaborative on High-Risk Drinking in June. Interested schools are invited to attend an informational session, including an opportunity to meet and hear from Wave 1 participants and faculty experts, on June 27-28, in Boston.  The next phase will be launched in January 2014, Lanter says.

NCHIP is built on a “culture of assessment,” Lanter says. The projects start small, build on successes and adjust for missteps with a process dubbed Plan-Do-Study-Act, or PDSA, she says.

The presenters outlined the approaches they developed through their NCHIP committees and PDSA experiments.

Some highlights of the presentations:

Attempts to broaden the effort by screening and inviting participation from a wider contingent of students who had not been involved in an alcohol incident were not as successful.

“We found it is not Field of Dreams: If we build it, they won’t necessarily come,” says Matzkin. While students who took part in BASICS felt the program was helpful and easy to take advantage of, few were motivated to take part without a push, she says.

The DCHIP team, which includes representatives from across disciplines, then hit on the idea of incorporating BASICS into athletics’ Dartmouth Peak Performance program. Donald Brooks, assistant athletics director for Peak Performance and a member of the DCHIP team, said that while Kim’s goal was to eradicate emergency visits for blood alcohol levels of .25 or higher, athletics’ goal is “to eradicate losses” for Dartmouth teams.

Her group found that a large number of students would line up outside the stadium lot early in the morning before the game. They would often go to sleep in their cars after a night of drinking and would consume large amounts of alcohol during tailgating parties that often ended in interventions by campus security or Durham police.

The UNH NCHIP group also discovered that many of the students had not eaten since the night before the event and many were not well hydrated. The group came up with a plan to cook and serve free pancakes in the stadium lot starting early in the morning. They circulated fliers promoting the free pancakes and had student volunteers monitoring sections of the lots for alcohol incidents and spreading the word about the free pancakes.

Hundreds of students took advantage of the offer and many were grateful for the food, Garvey said. Early data indicated fewer incidents at the event, and the UNH NCHIP team is looking at ways to expand the offering to include coffee and hot chocolate, and perhaps to add additional pancake stations for future events.

Garvey says the experiment illustrates the innovative and creative approaches that NCHIP fosters to address endemic problems such as intoxication at high-risk special events.

The system, dubbed “An Inch is Better Than No Inch,” has worked so well for Hwang that she has become an advocate of the process in other areas at the college, and a similar methodology is now in place in the office of the dean of the college at SUNY-Stony Brook, she says.