When Rob Lauzen ’15 volunteered to visit the Orion House, a residential treatment facility serving males ages 11 to 19, he had no idea how he could connect with the residents. But that changed quickly. 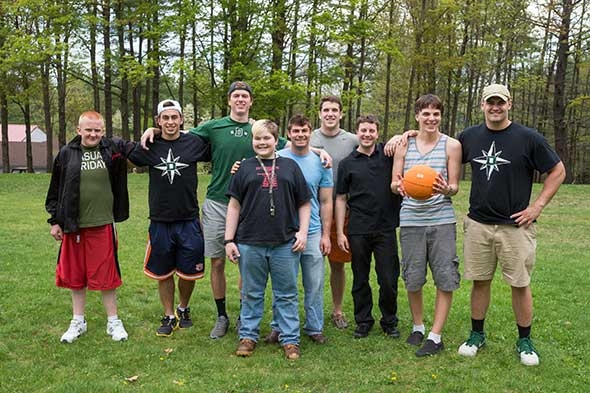 “After our first visit, it wasn’t like we were doing community service,” he says. “It’s a lot of fun. We are just going, hanging out with some great kids, and trying to do a little bit of good.”

It seems to be working.

Nearly every week since October, a group of Dartmouth football players and graduate student military veterans have made the 40-minute drive south to Orion House in Newport, N.H. Orion House takes in underprivileged adolescent males who suffer from substance abuse, have family problems, and/or are dealing with emotional and behavioral issues.

It all began when Ron Bucca, a Master of Arts in Liberal Studies (MALS) student, heard about the not-for-profit from a friend. Shortly thereafter, Bucca, a U.S. Army Staff Sergeant, and other members of the Dartmouth Graduate Veterans Association traveled to the residential facility.

But after a few trips, Bucca thought Orion House residents might connect better with Dartmouth student-athletes: There would be less of an age gap between the residents, and the boys might have more in common with athletes, since nearly all the Orion House residents play sports. So Bucca approached classmate and football player Edward von Kuhn ’14 about volunteering at Orion House. Once football season ended, Von Kuhn and a crew of teammates joined the veterans on a trip to Orion House.

“When the football guys started coming,” Bucca says, “that’s when this really took off.”

“Most of the Orion House kids play sports,” says von Kuhn, “so I think they look up to us because we’re college athletes. And a lot of them are interested in the military, so they can get some guidance from our Dartmouth veterans.”

On a recent trip, von Kuhn, wearing a gray “Dartmouth Football” sweatshirt, played a game of pickup basketball with several residents. Football players William Guinee ’15 and Lauzen looked on and chatted about sports with a 16-year-old from Sullivan County in New Hampshire.

Nearby, Bucca, who served in Iraq, talked about his experience in the military with a 15-year-old from Grafton County, who wore a camouflage jacket and said he wanted to join the Marines.

The Dartmouth volunteers usually just hang out with residents, says Lauzen, and occasionally help them with schoolwork. They stay an hour and half to two hours each visit, depending on residents’ schedules.

The young men of Orion House are kept busy. They get up around 5:30 a.m. and perform chores, such as cleaning common rooms, washing dishes, or feeding the facility’s chickens, goats, and pigs. Orion House provides residents with rides to school, and in the evening they often have study hall. 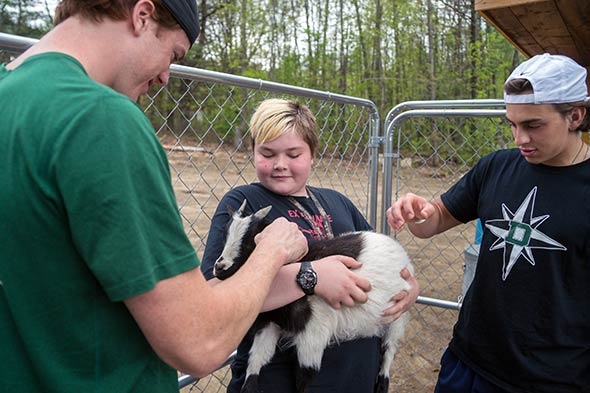 Orion House, which was founded in the 1970s, provides in-house therapy and mental health assessment. Some residents stay for a few weeks at Orion House, while others have lived there for years.

“I think it gives us a kind of a picture of what goes on beyond Hanover,” says Guinee.

“We have a great life right now. This reminds you of what is happening in the real world.”

‘We Make Sure We Go Every Week’

Justin Fromer, the residential coordinator at Orion House, says the most vital thing the facility offers residents is stability—three meals a day, a bed, and a roof over their heads.

“Orion House provides that support system,” says Lauzen, “and we’re trying to help out with that.”

“We make sure we go every week,” says von Kuhn, “because if we don’t show up for two weeks, they’d say, ‘Oh those Dartmouth kids are just like everyone else—they show up and then they’re gone. They don’t actually care about us.’ ”

Dartmouth volunteers have also brought Orion House residents to Hanover. The volunteers took the adolescents to a football game and gave them tours of the Black Family Visual Arts Center and the Hood Museum of Art. Most recently, they attended a Dartmouth ice hockey game.

“Ideally,” he says, “we’d like to find funds that could support tuition and room and board for four to five graduates of Orion House as they attend college.”

Fromer says the Dartmouth volunteers have already given residents something that can’t be measured.

“I think they’ve provided the kids with exposure to what they could be and what they can achieve in life. They don’t get exposed to many role models,” he says. “This shows that the world outside this place hasn’t forgotten about them.”

“It helps our kids see what they can become,” says Bissell. “For the Dartmouth students to take the time to come down here every week, I don’t think it gets much better.”

Note: The names of Orion House residents have not been included in this article in order to protect their privacy.

We know that heat waves kill crops and cause illnesses like heat stroke, but they also have other effects such as increased interpersonal aggression (and) increased rates of workplace injury.