Perhaps as much as flowers blooming or students lounging on the Green, the vibrant Dartmouth Pow-Wow celebration is a sure sign that spring has arrived in Hanover. 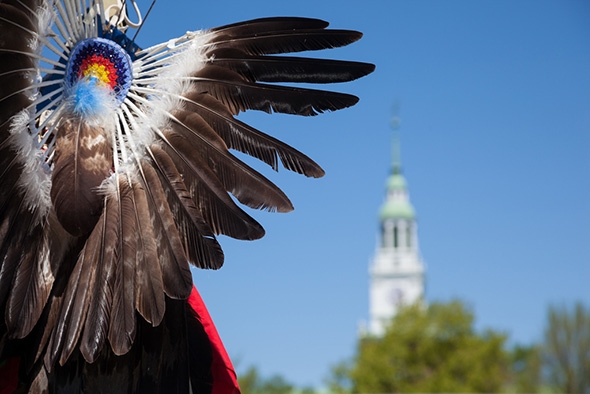 “Pow-Wow time means gathering the family, both the Native and non-Native members of our community, for a time of celebration and unity in the midst of our diversity,” says N. Bruce Duthu ’80, the Samson Occom Professor of Native American Studies. (Photo by Eli Burakian ’00)

Throughout Mother’s Day weekend, about 500 attendees are expected to take part in the annual event, which features dance and drum competitions, community dinners, a ceremony honoring mothers, and another that recognizes Native Americans of Dartmouth’s Class of 2013.

“The event has long been an important component of the New England Native Pow-Wow circuit and regularly draws dancers, drum groups, vendors, and spectators from throughout the region,” says Duthu. “It serves as a prominent and very public affirmation of the College’s longstanding commitment to Native peoples and their communities.”

“I am looking forward to putting on an event that is centered around celebration, culture, and family,” says Wells. “It is a very exciting thing to be a part of, and I cannot wait to come together with this Dartmouth community and share this special time.”

In 2008, Indian Country called the Dartmouth event “one of the largest pow-wows in the Northeast.” Participants at Dartmouth will compete for cash prizes, which are awarded to top performers in various categories of dance. On-site vendors will sell traditional Native American food, crafts, and clothing.

“The Pow-Wow is my favorite event of the year,” says Christina Goodson ’14, who is Otoe-Missouria/Iowa and will dance in the festivities. “It is a time and place for me to showcase my culture to campus and the surrounding area. I especially look forward to just being outside and dancing with other Native Americans at Dartmouth, the visiting alumni, and my friends who want to learn more about my culture.”

In its earlier years, the Dartmouth’s Pow-Wow, which dates back to 1973, was held at the BEMA and then near Storrs Pond. The Pow-Wow is an inclusive celebration that lets community members participate and observe a variety of Native American music and dances.

“Pow-Wow time means gathering the family, both the Native and non-Native members of our community, for a time of celebration and unity in the midst of our diversity,” says Duthu. “I look forward to seeing old friends, colleagues, and classmates who answer the call of the drum. It’s a very special time at Dartmouth.”