Dispatches From the Civil War

Read the full story by Lauren Vespoli ’13, published in the May/June 2013 issue of Dartmouth Alumni Magazine. 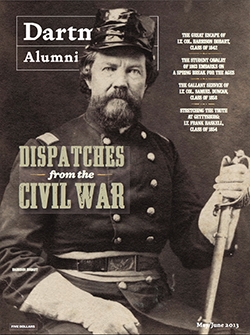 Harrison Hobart, Class of 1842, is one of the Dartmouth alumni who fought in the Civil War. (Photo courtesy of Dartmouth Alumni Magazine)

One hundred fifty years ago, Dartmouth alumni and students were not immune to the patriotic—and rebellious—fervor of the times.

In 1944, College President Ernest Martin Hopkins, Class of 1901, declared in a speech that during the Civil War “no college had a larger portion of her men enrolled in the armed forces,” according to historian Charles Wood.