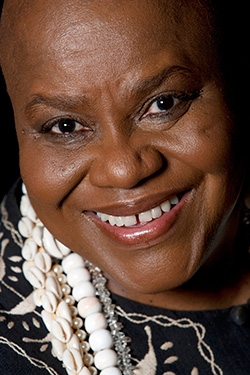 Bernice Johnson Reagon, a longtime voice for freedom and justice, is spending spring term in residence as a Montgomery Fellow. (Photo by Sharon Farmer)

Johnson Reagon, a longtime voice for freedom and justice, is spending spring term in residence as a Montgomery Fellow. A civil rights activist and an original member of the Student Non-Violent Coordinating Committee (SNCC), Johnson Reagon has taught at Spelman College and American University and published numerous articles on the civil rights movement and the music of the time. But the MacArthur Fellow is perhaps best known for her work with the Grammy Award-winning group she started.

She will give what she calls a “song talk” titled, “I Remember, I Believe,” at 4:30 p.m. on May 14 in the Hopkins Center for the Arts’ Moore Theater. The event is free and open to the public.

In her office at the Hop, Johnson Reagon reflects on growing up in the South in the ’50s and ’60s and her career with Sweet Honey in the Rock, a group she calls “tight and innovative.” She says music played a large role in her childhood.

“I grew up in southwest Georgia, and there wasn’t anything I did that didn’t have music in it,” says Johnson Reagon, noting that she sang at church and school and nearly everywhere in between.

Johnson Reagon attended Albany State College in Georgia, a school she was expelled from after participating in a civil rights demonstration. She earned a bachelor’s from Spelman College and a PhD. from Howard University, founding Sweet Honey in the Rock during her time at Howard.

“It was a community based idea that grew,” says Johnson Reagon. “At various points we intersected with other progressive groups and ideas.”

The group, now composed of six women, combines elements of blues, traditional gospel hymns, rap, reggae, African chants, and jazz improvisation. The group’s “repertoire is steeped in the sacred music of the black church, the clarion calls of the civil rights movement, and songs of the struggle for justice everywhere,” according to their website.

The group members have advocated for a range of civil rights issues over the years. One of their recent songs, “Are We A Nation?” addresses the immigration debate. In 2009, Sweet Honey in the Rock sang at The White House. During the event, First Lady Michelle Obama called them “one of my favorite groups,” and one that uses “music and song to advance freedom and social justice.”

Johnson Reagon retired from the Sweet Honey in the Rock in 2004.

For the “song talk” next week, Johnson Reagon will be joined by her daughter, Toshi Reagon, a singer and guitarist.

“I wanted my daughter there because I wanted a generational relationship and because her sound is different than mine,” says Johnson Reagon.

Kenneth and Harle Montgomery established the endowment that bears their name in 1977 to “provide for the advancement of the academic realm” of Dartmouth. Montgomery Fellows, who reside on campus for varying lengths of time, are distinguished figures from academia and outside of it. Fellows have included writers Saul Bellow and Louise Erdrich ’76 and politicians Gerald Ford and J. William Fulbright.

At Dartmouth, Johnson Reagon is interacting with students and professors on campus throughout spring term, and also teaching a music department course, “The Role of Music in the 1960s.”