High school students from across the region will test their brain power at Dartmouth on May 11 in the Upper Valley Brain Bee. 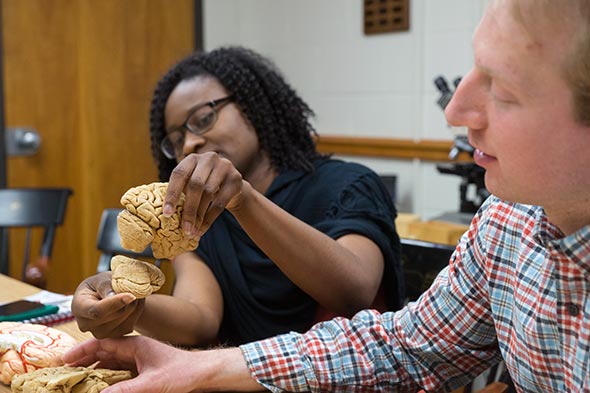 Students will test their knowledge of neuroscience and brain anatomy in the competition, which organizers hope will become an annual event, as they vie for a chance to advance to the National Brain Bee in Washington, D.C., next winter.

Bender and Onakomaiya have been holding “brain boot camps” in six high schools in the Upper Valley for two months to drill students on brain anatomy and neuroscience. They give all the contestants BrainFacts, a short introductory textbook on the brain and nervous system, and they are encouraged to study the materials for at least one to two hours a week to prepare for the competition.

“I’ve been surprised by their enthusiasm and how much some of them know about neuroscience already,” Onakomaiya says.  In fact, one of her students had already been to a “cognitive neuroscience summer camp.”

The first round of competition will involve written questions, a hands-on brain anatomy quiz with a brain model and plasticized brain, and a diagnosis component involving a doctor-patient interview in which the patient describes symptoms and the contestants have to write a diagnosis. Five people will advance to the second part, a traditional spelling-bee-style elimination round of questions and answers. There will be one winner.

The Brain Bee will be chaired by Hermes Yeh, professor of physiology and neurobiology and president of the Society for Neuroscience New Hampshire Chapter. Judging the bee are Geisel’s Professor Barbara Jobst, Professor Allan Gulledge, and Research Associate Jeremy Barry; and Max Mehlman, a doctoral student in the Psychological and Brain Sciences Department.

The Brain Bee will feature neuroscience activity stations,  including the chance to try a neurological exam with neurologists Jeffrey Cohen and Alissa Thomas, a station offering a hands-on introduction to the human brain with Rand Swenson, chair of the Anatomy Department, a station on how the brain works and doesn’t work in dementia with Professor Virginia Olga Emery of the Department of Psychiatry, and a brain coloring station with Michelle Sama.