Dartmouth and its partners in the University of the Arctic Institute for Applied Circumpolar Policy (IACP) have issued a report urging the adoption of new shipping rules, improved safeguards against oil spills, and the creation of environmental and safety standards in polar waters. 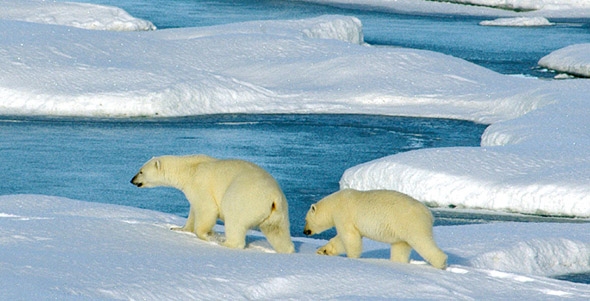 Polar bears are among the endangered species in the Arctic that could benefit from the recommended safeguards. (Photo courtesy The Select Committee on Energy Independence and Global Warming, U.S. Congress)

The report calls for action by the Arctic Council, the intergovernmental organization for the eight Arctic states—Canada, Denmark/Greenland, Finland, Iceland, Norway, the Russian Federation, Sweden, and the United States—and encourages the council to expand on the report’s recommendations at its May 15 meeting in Sweden.

This is the fifth report produced by the IACP, a collaboration between Dartmouth’s Institute of Arctic Studies at the Dickey Center for International Understanding and the University of Alaska Fairbanks, in partnership with the Russia and Eurasia Program of the Carnegie Endowment for International Peace. The IACP promotes discussion of critical policy issues facing the circumpolar north as a result of climate change.

“The scientific evidence of climate change and global warming is now irrefutable and the pace of global warming, sea ice melt and permafrost thaw has accelerated,” the report says. “The ‘new’ Arctic and its abundant energy and natural resources are now, more than ever, exposed to development. The Arctic is a region where Russia, Europe and North America, working with indigenous peoples and interested non-Arctic states, have taken initial steps to make the Arctic a peaceful and stable region where productive, sustainable development is achievable. The compelling issue now is how to build, strengthen, and sustain this cooperation.”