“I haven’t really planned much of my career,” says Adina Roskies, a professor of philosophy at Dartmouth. “I tend to just go where things take me.”

Originally, Roskies thought her career might take her into outer space. “I wanted to be an astronaut,” she says. “For a long time, I was going to be an astrophysicist.” 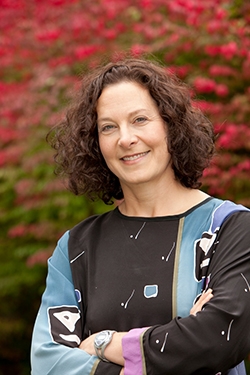 Adina Roskies is on leave from Dartmouth, earning a master’s degree in law at Yale. “Some of my areas of expertise aren’t things that I’ve chosen,” Roskies says. “It’s as if they chose me.” (Photo courtesy of Adina Roskies)

But as a senior at Yale, she had an epiphany. “What I really wanted to understand was how people thought and what thinking was and what consciousness was. I discovered it in an interdisciplinary seminar that had a large philosophy component and also a neuroscience component.“

So she went on to earn two doctorates—one in neuroscience and cognitive science from the University of California, San Diego, and one in philosophy from MIT. Currently, she’s on leave from Dartmouth and earning a master’s degree in law at Yale, thanks to a Mellon New Directions Fellowship. Her interest in law grew out of her involvement in a MacArthur Foundation-funded study that looked at ”ways in which neuroscience would, could, and should affect the law. I felt I needed a better understanding of the law“ to address that question, she says.

”I am somebody who really values and enjoys working across disciplines,“ Roskies adds. ”In my experience with neuroscience and philosophy, it was pretty clear to me that people who were trained in only one of those two areas tended to make, I thought, big mistakes when they talked about the other area. I think it’s indispensable to have training so that you can really see problems from the inside, from the perspective of the discipline.

“Some of my areas of expertise aren’t things that I’ve chosen,” Roskies continues. “It’s as if they chose me. But even though it looks like I’ve been jumping around from one discipline to another, if you stand back a bit and look, I’ve been interested in the same questions about the brain and cognition the entire time—it’s just a matter of how I’ve approached them that has shifted.”

Those questions, she explains, involve understanding “how we think and how we work, and whether such understanding could or should influence the way society is, the way we structure it.” Her research interests currently concern the question of free will—a question that “lies at the nexus of metaphysics and brain science and law, as well.”

These interests, she acknowledges, are on the frontier of her field, whereas, when she’s in the classroom, Roskies usually feels “obligated to teach the fundamentals.” But, she quickly adds, the fundamentals are “also incredibly interesting, so it’s not a sacrifice.”

“Teaching is tremendously important,” she continues. “The people who made the biggest impressions on me in my life besides my parents are my teachers, so it’s a real responsibility and it’s important to do it well. I think it’s the importance of it that draws me to the teaching part, and I think it’s the excitement of breaking new ground that draws me to the research part.”

“I’ve had incredibly gratifying moments teaching,” she adds, when students “see things in a new way or grasp something that they hadn’t grasped before, or come away thinking, well, this is cool. Those are days that I go home very happy.”

Roskies has served as senior editor of the journal Neuron; was awarded the William James Prize and the Stanton Prize by the Society of Philosophy and Psychology; and received a Laurance S. Rockefeller Visiting Faculty Fellowship from the Princeton University Center for Human Values. She is also co-editor of a forthcoming primer on law and neuroscience for judges and lawyers.

Perhaps it was predestined that she would end up in cognitive science and philosophy, despite her insistence that she hasn’t charted any aspect of her career. The once-would-be astronaut points out that she grew up during the heyday of the American space program. But today, with the federal government having just announced a decade-long effort to map the human brain, her switch to neuroscience turns out to be well timed. “It is interesting,” she observes, “that I wanted to be an astronaut. We’ve abandoned the space shuttle and instead we’re devoting our research dollars to the brain—so maybe I was prescient.”