It was while researching stories about the Buddha literally giving away his body parts to humans in need that Reiko Ohnuma began to think about motherhood. A mother herself, Ohnuma, associate professor of religion at Dartmouth since 1999, says the stories of extreme self-sacrifice struck her as “very similar to the intensely physical nature of mothering.” 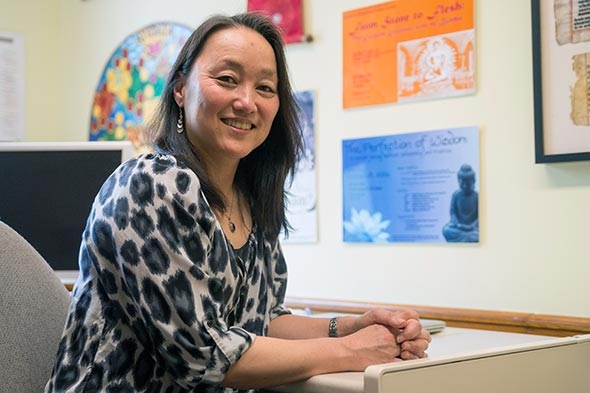 Professor Reiko Ohnuma found motherhood to be the “most appropriate metaphor” for the Buddha and his teachings. (Photo by Eli Burakian ’00)

In fact, she characterizes motherhood as the “most appropriate metaphor” for the Buddha and his teachings. Mothers represent love, self-sacrifice, and compassion. Yet, because mothers direct these feelings toward their children rather than all people, they represent the very opposite of the Buddha’s exhortations to love everyone equally. This contradiction is at the heart of Ohnuma’s book Ties That Bind: Maternal Imagery and Discourse in Indian Buddhism, published last year by Oxford University Press.

In pre-modern India, the mother-son bond represented an especially intense emotional attachment, in part because males were valued more, she says. But Buddhism teaches that attachment leads to suffering. Monks had to renounce that bond in order to embrace Buddhist principles of selflessness and universal love. Ohnuma points out that these men were sons before they were monks, and the narratives they wrote reflect the conflict they felt.

“The mother represents everything that they’re trying to transcend,” she says. “But even as they’re often condemning motherhood and maternal emotions, they give voice to this kind of longing for their own mothers and this longing for that emotional bond that they once had.”

Ohnuma admits she was surprised by how much these monastics who had renounced family life appreciated the daily reality of the mother.

“When they praise the mother for her intense love, her intense compassion and self-sacrifice for her children, they’ll give an example,” she says, “and the one example that really struck me was in a particular text where the author says, ‘Look at the mother. The mother loves her baby so much that she is willing to sleep in the wet spot on the bed.’ That immediately reminded me of, it’s in the middle of the night, you’ve got to nurse the baby, you’re too tired to get up and sit in a chair so you bring the baby to the bed and the breast milk is leaking, and it’s almost unbelievable that these celibate, renunciant monks living in a monastery in pre-modern India had that kind of appreciation for the day-to-day realities of motherhood.”

The narratives reveal an image of Buddhist nuns—women who opted to join a Buddhist monastic order rather than marry and have children—that was equally conflicted in pre-modern India. In pursing their own aims, they were seen as acting more like men. As women have become more empowered and gained a greater voice in the Buddhist tradition, they have begun to change the face of Buddhism, Ohnuma says, and now are grappling with such issues as how to square maternal love for one’s children with Buddhist values. She notes that American Buddhist women today are “trying to make some kind of reconciliation and even seeing that things like the parenting of your children, the mothering of your children, can be a form of spiritual practice that is in consonance with Buddhist ideals and not necessarily opposed to them.”

The richness of narratives over philosophical or doctrinal texts allowed Ohnuma to peer beneath the surface of the dominant message, the condemnation of selfish, i.e., maternal, love, to find the subtext below, the longing for that maternal love.

She encourages the students in her classes to do likewise when they read. Philosophical or doctrinal texts are fine for conveying a point, she says, but narrative “has a way of escaping you and conveying all kinds of alternative messages.”