Growing up in Northern Virginia, Riley Ennis ’15 delighted in family trips to the beach. There he developed a keen interest in marine biology. Now 19, Ennis says that his passion for marine life opened new doors to learning. But it was his sister’s congenital heart defect and her many surgeries and high-tech implants that channeled his passion for biomedical science. 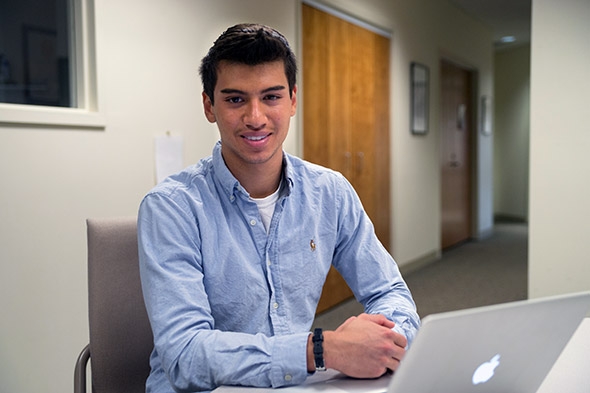 Dartmouth’s Riley Ennis is pursuing his dream through a Thiel Fellowship. (Photo by Eli Burakian ’00)

Today, his youthful pursuits have led to a prestigious Thiel Foundation Fellowship that gains Ennis entrance into a two-year program and $100,000 in funding. It also provides access to mentorship from the foundation’s network of technology entrepreneurs, investors, scientists, and innovators.

According to the foundation’s announcement, Ennis is part of “the third set of young entrepreneurs to be awarded ’20 Under 20’ Thiel Fellowships. These fellows will pursue innovative scientific and technical projects, learn entrepreneurship from the ground up, and begin to build the innovative companies of tomorrow.” The winners for 2013 were selected from more than 500 applicants.

Two of Ennis’ Dartmouth classmates, Gary Le ’15 and Christopher Walker ’15, are also among this year’s “20 Under 20” Thiel Fellowship winners.

According to the Thiel Foundation, Le hails from East Brunswick, N.J., and is heading toward a career in Internet security. He is working on a real-time identity verification system for various applications in e-commerce, online communities, and collaborative businesses.

Walker, of Chevy Chase, Md., is a video game designer, programmer, and artist, says the foundation. He started a company in which he designed a game to improve spatial cognition. As a Thiel fellow, Walker will focus on developing interactive software to teach technical skills like programming, music, and mathematics.

Ennis’ scientific interests can be traced back to a PBS Nova program about horseshoe crabs. “There is a protein in the crab’s immune system that acts as a tag, binding to bacteria and telling the body to destroy whatever it is touching,” he says. After the show, he conjectured that if the human immune system could be similarly activated by a functionally similar (homologous) protein, this could offer a cancer therapy alternative to chemotherapy and its devastating side effects.

“This was a crude, basic idea but it led me down the path of cancer immunology toward an understanding of how we might empower the immune system to more effectively treat and even diagnose cancer,” Ennis says.

“In high school I took an honors biology course and I loved it,” he recalls, “so in my second year I went into a biomedical research program at the University of Pennsylvania, where I learned about conducting lab research and molecular techniques.”

As a high school senior, Ennis managed to secure lab space and enough funding to pursue his immunology research at Georgetown University and the Sheikh Zayed Institute at Children’s National Medical Center in Washington, D.C. This brought him to the point where he secured patents for the human protein homolog and the technology platform for its production. With these in hand, Ennis formed Immudicon, a company that would facilitate corporate partnerships and raising capital.

At Dartmouth, Ennis co-founded the entrepreneurship club Mitosis. “The club is an ‘accelerator program’ that helps student groups build their own startup companies by pairing them with faculty mentors and assisting them in the product development process,” he says.

Ennis will be leaving the College to further his entrepreneurial activities, most likely in the San Francisco area, where the Thiel Foundation is based. “The hardest part of the Thiel program is going to be leaving this place, but I see this as being an extension of my Dartmouth experience,” he says. “I have this great network and this great opportunity to pursue a passion.”