Robert W. Lasher ’88, the Deputy Museum Director of External Relations at the San Francisco Museum of Modern Art (SFMOMA), has been appointed Senior Vice President for Advancement at Dartmouth. Lasher brings nearly 20 years of experience working in institutional strategy, philanthropy, and marketing for a range of educational, scientific, and cultural institutions. Lasher will assume his new role on July 1, 2013. 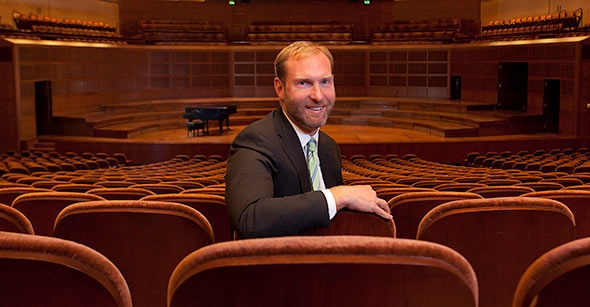 “Bob is a proven leader and strategic thinker with a deep understanding of and passion for the mission and goals of Dartmouth,” says President-Elect Philip J. Hanlon ’77. “He will be a valued partner to me and other senior leaders in continuing to cultivate a culture of philanthropy and engagement among students, alumni, parents, and all of our constituencies. He will play an important role in ensuring Dartmouth’s long-term growth and success.”

At SFMOMA, Lasher directed institutional strategy and development around the museum’s $610 million expansion campaign. In this leadership role, he managed the campaign strategy, including philanthropic support, trustee engagement, membership, marketing communications, visitor services, and community engagement. Prior to SFMOMA, he served as the Director of Development and Strategy at the San Francisco Symphony. Previously, Lasher directed fundraising at leading scientific and research organizations, including the L.S.B. Leakey Foundation and the National Geographic Society, as well as the University of Virginia’s School of Architecture.

“It is an honor to return to Dartmouth,” Lasher says, “and it is a privilege to join the people who help make Dartmouth an academic institution committed to producing graduates eager to tackle the world’s most challenging problems. I would like to thank Ann Root Keith for her leadership during the interim period. I look forward to building on what she and the entire division have accomplished to attract and retain the most exceptional faculty and to ensure that Dartmouth is affordable to all students.“

Lasher will work closely with Hanlon, the Board of Trustees, other senior leaders, and faculty to increase philanthropic support and alumni engagement for the Arts & Sciences and professional schools. He will lead the offices of Alumni Relations and Development, seeking meaningful ways to help advance Dartmouth’s standing and reputation nationally and internationally.

Mastanduno says, “Bob stood out among the truly exceptional candidates we interviewed.  His impressive track record executing development and engagement programs that advance the goals of an organization, along with his knowledge of Dartmouth, make him a great fit. His experience, creativity, and enthusiasm will help us achieve Dartmouth’s educational objectives.”

Lasher succeeds Carrie Pelzel, who retired as Senior Vice President for Advancement in June 2012 after 15 years at Dartmouth. Since then, Ann Root Keith has served as interim. Lasher earned his undergraduate degree in history from Dartmouth in 1988. He currently lives in San Francisco with his partner, Ali Gilmore. They are looking forward to re-locating to the Upper Valley.