Todor Parushev ’14 Cuts an Academic Path Across the Globe

If he’d had a better sense of direction, Todor Parushev ’14 might now be on his way to becoming an economist. 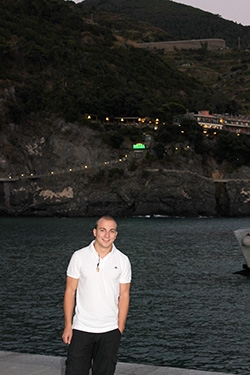 Instead, he’s majoring in Mathematical Social Sciences (MSS) and has received a grant in the discipline from Dartmouth’s Office of Undergraduate Research to do a study on interlocking corporate directorships in Chile under the mentorship of Professor Joel Levine, chair of MSS.

It was during his first year at Dartmouth that Parushev stumbled onto MSS. “Everybody who is a freshman,” he says, “walks around the departments and checks out all the majors.”

“I was in Silsby Hall, looking for Economics, but I got lost in the basement and ended up in MSS. Professor Levine had just a couple of people there. I got interested in what he was saying. He was really open and very close to students, which I liked more than the big classroom full of people upstairs.“

He admits that he did end up double-majoring in economics, but ”MSS is the major closest to my heart.“

Parushev made just as strong an impression on Levine. ”I was recruiting him from the beginning,“ Levine says. ”I found myself thinking of this freshman as a graduate student. He has an array of skills that are rarely combined: He thinks about how societies work—and do not work. He makes light work of mathematics, programming, and data analysis. He knows his audience and communicates.“

Indeed, while Parushev may have gotten lost in the basement of Silsby, he clearly knows how to navigate his way around the world. Born in Bulgaria, he attended high school in New Mexico, has spent time in Italy, traveled to Chile to gather data for his study, and is currently on a Language Study Abroad program in Barcelona, where, he explains, ”I’m trying to polish my Spanish, so I can continue on in Latin America.“

He became intrigued by the prospect of using a mathematical model developed by Levine to map interlocking directorates. He explains that while the practice of interlocking directorates is legal, it raises questions about the influence of corporate decision-making and the independence of board decisions. He was drawn to the topic in part because he knew corporate interlocks were an issue in Bulgaria. But he decided to do his study in Chile instead, since it’s one of the fastest-developing countries in Latin America and ranks high on many business practice indexes. In addition, data on Chilean corporations is easy to find; he got most of what he needed through Bloomberg Businessweek. Finally, on a practical note, several of Parushev’s friends from high school were working in Chile, so he had ready-made, onsite contacts.

”Todor was fully engaged in the research,“ points out Levine, ”not just executing a procedure, but sensitive to the issues that made it difficult—and made it different from my own research.“

Parushev notes that his findings were partly substantive—a confirmation of significant interlocks, both ”within individual industries,“ as noted on a poster presentation he prepared, as well as ”between industries that are not typically related.“

Even more importantly, though, his results were a validation of the methodology. ”We didn’t discover something that nobody knew,“ he says, ”but we visualized it in a nice way. People told us that what we visualized is right, so we were happy. This research was more about proving the method, and it’s a powerful method.“

He sees himself, after graduation, continuing to do research of this nature, probably in Latin America. And graduate school, at some point in the future, is definitely an option.

”The thing I really like in research,“ Parushev continues, ”is that you might not find a final answer to something, but you may make a step toward finding it.“

For the chance to take such a step himself, Parushev says, ”I really want to thank the Office of Undergraduate Research. I’m very grateful for their belief in the students of Dartmouth—their belief that students can do something to change the world."