Imagine putting together a jigsaw puzzle—with a twist: Each time you fit a piece into place, the picture of the puzzle changes. Now you have an idea of the challenge facing scholars who study the Tsinghua bamboo manuscripts. 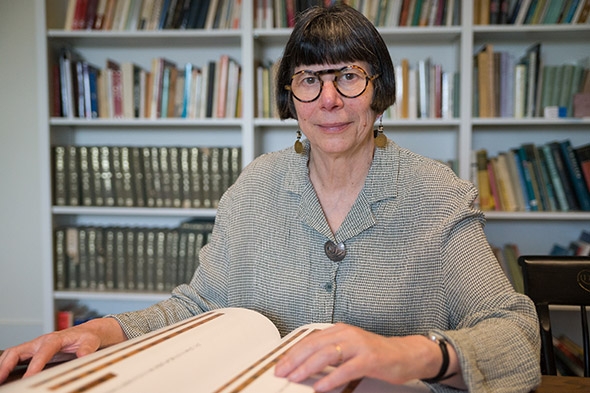 Professor Sarah Allan has just completed a book with some surprising revelations about early Chinese political theory that she discovered in the Tsinghua and other bamboo manuscripts. (Photo by Eli Burakian ’00)

The manuscripts were written with a brush and ink vertically on long slips of bamboo, tied together with two or three strings, like a lattice, and then rolled to form scrolls. They are believed to have been buried in a tomb in China around 300 BCE, looted from that tomb at some point, to end up, eventually, in the Hong Kong antiquities market.

A Tsinghua University alumnus purchased them in 2008 and donated them to the university. Three volumes with transcriptions and high quality photographic reproductions have been published thus far, and their contents have sparked debate among scholars worldwide. In late August 2013,  about 40 of these scholars will gather on the Dartmouth campus to read and compare their findings at the Dartmouth-Tsinghua Conference on the Tsinghua Bamboo Manuscripts. 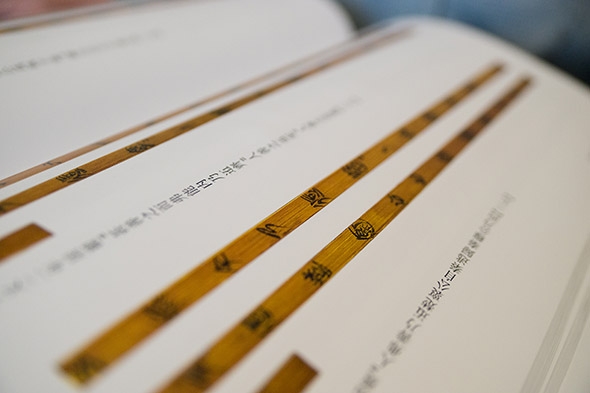 The bamboo manuscripts are believed to have been buried in a tomb in China around 300 BCE. (Photo by Eli Burakian ’00)

Allan, who has already convened several ground-breaking bamboo-manuscript workshops on campus, is organizing this conference with Wen Xing, the Robert 1932 and Barbara Black Professor in Asian Studies.

After the first emperor, Qín Shǐ Huáng, had unified China in 221 BCE, he wanted to stamp out the ideas of Confucius and other philosophers who might present a challenge to his authority, so he not only executed many scholars but also burned their books and banned private libraries. The bamboo manuscripts, buried safely underground, escaped that fate. They give us a glimpse of intellectual life—what people were reading—in the formative period of Chinese thought.

Many of the Tsinghua manuscripts are historical works and some are similar to chapters of the Book of Documents, one of the five classics of the Confucian canon.  They are changing our picture of early Chinese history, Allan explains.

“It’s a bit like discovering previously unknown sections and different versions of some of the books of the Old Testament. The bamboo manuscripts give you a different take on things you thought you already knew about,” she says. “History is essentially a way of thought. When we talk about history, it’s not because we’re interested in facts. We’re really interested in what we think they mean. And what we think they mean changes according to what our current perspective is. In China, this was very clear. In China, people looked directly to history for a way of interpreting the current world. They were aware they were doing this. But we do that, too.”

The conference at Dartmouth will focus on three of the published manuscripts and will include collective readings, a technique that Allan says works well to encourage debate among people who come from different scholarly backgrounds; half of the scholars will be from China, the other half from countries across the globe. Nearly everything about the slips is open to debate, from how to read the characters in particular sentences, to when the texts were composed and what they mean.

“From about 200 BCE on, Chinese characters are more or less like they are today. They’re easy to learn if you know modern Chinese,” says Allan. “These bamboo slips from the 4th century BCE present more problems because the writing system hadn’t yet been standardized. It’s a little bit like reading Anglo Saxon or even early English, where you get a lot of different spellings for things. There are many unusual characters and many debates about how to decipher them. On the other hand, they are readable, although with many problems of interpretation.”

Allan recently completed a book with some surprising revelations about early Chinese political theory that she found in the Tsinghua and other bamboo manuscripts. The manuscripts reveal that some early philosophers advocated abdication and rule by merit rather than heredity.

“Such ideas were suppressed because they presented a challenge to the hereditary dynasties of later periods,” she says. “We didn’t know such theories existed, but once you find them in the manuscripts, you suddenly see that many ideas in the texts that have been transmitted to us are actually arguments against them. So you know that such theories were actually current at that time.”

And another piece of the puzzle falls into place.