In this video, Andrew Delbanco, called “America’s Best Social Critic” by TIME magazine, sits down with Dartmouth Now to talk about the future of higher education.

“It’s clear we’re in the middle, or at least at the beginning, of a revolution in online education,” says Delbanco. “I think, as with all revolutions, nobody quite knows where it’s going to go, if it’s going to do more harm than good. I think it has potential for both.” 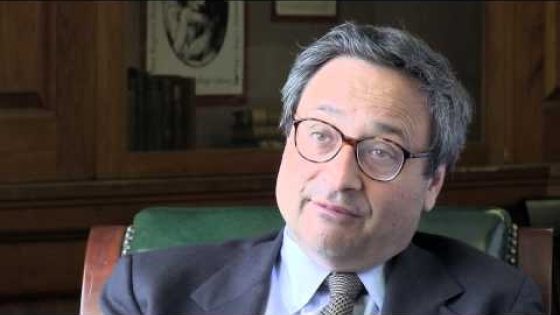 Remote video URL
Delbanco, who serves as director of the Center for American Studies at Columbia University, was on campus last month as the speaker for this year’s William Jewett Tucker Lecture and as a part of the “Leading Voices in Higher Education” series.

Delbanco, an award-winning writer, is the author of the 2012 book College: What it Was, Is, and Should Be, the title of which was the title of his lecture at Dartmouth. Delbanco has written many books and is a regular contributor to The New York Review of Books and The New Republic.

The William Jewett Tucker Lecture and the Tucker Foundation are both named for the ninth president of Dartmouth, who served from 1893 to 1909. Tucker, a member of the Class of 1861, helped usher Dartmouth into the modern era. He worked to increase the size and scope of Dartmouth—tripling the size of its student body and the number of faculty members during his tenure. In addition, he oversaw the addition of 20 new buildings and the introduction of a broadened curriculum.

Georgia Institute of Technology Professor Richard DeMillo is the next ‘Leading Voices’ speaker on May 7.