In this video interview, Brandon Butler, director of public policy initiatives at the Association of Research Libraries, talks about the legal questions regarding copyrights in the 21st century.

“We have to figure out, what rights do libraries have? What rights can they assert? And when they don’t have the rights they need, who can they partner with and so on, in order to create these new resources and bring those materials into the 21st century,” says Butler. 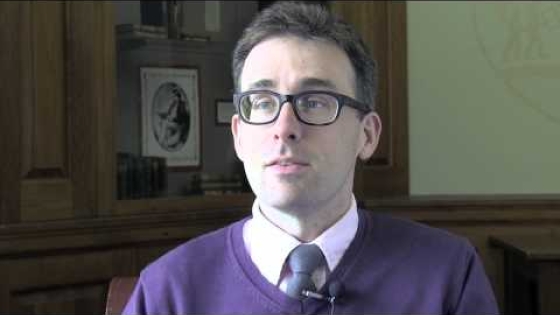 Butler was on campus May 15 to give a lecture titled “MOOCs and the Copyright Challenge: Fair Use in the Balance” as part of the Leading Voices in Higher Education.

An expert on copyright law, Butler graduated from the University of Virginia School of Law. At the Association of Research Libraries (ARL), he has researched a variety of legal issues connected to fair use, network neutrality, and the Patriot Act, and provided commentary on related court battles.

ARL, a nonprofit organization, addresses “issues of concern to the library, research, higher education, and scholarly communities.” It was established in 1932 “by the directors of 42 major university and research libraries that recognized the need for coordinated action and desired a forum to address common problems,” according to its website. Dartmouth College Library is one of the 125 members of ARL.