Baccalaureate 2013: For Brothers and Sisters, A Blessing

The Dartmouth College Gospel Choir’s songs of brothers and sisters, of praise and blessings, and of good times remembered captured the spirit of Dartmouth’s 2013 Baccalaureate. Members of the graduating class and multiple generations of their families and friends filled Rollins Chapel on Saturday afternoon for prayer, and song, and thoughtful words drawn from the many faith traditions represented at Dartmouth. 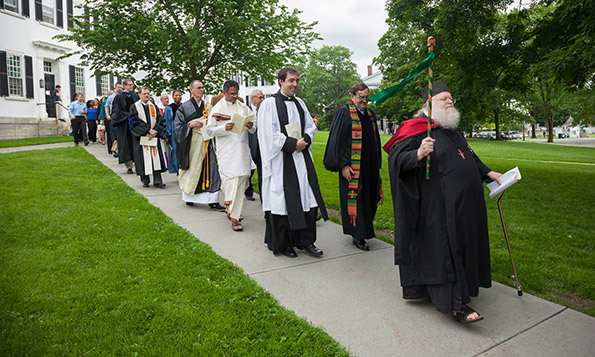 The principal speaker for the event was the Rt. Rev. V. Gene Robinson, Ninth Bishop of the Episcopal Diocese of New Hampshire (retired).

Dartmouth’s Baccalaureate, explains the Rev. Richard Crocker, the Virginia Rice Kelsey ’61S Dean of the Tucker Foundation and College Chaplain, “is a time of spiritual reflection and focus,” that, he believes, “is valuable to many students and their parents.”

As the Rev. Nancy Vogele ’85, director of religious and spiritual life at the Tucker Foundation, observes, “many, many Dartmouth students are religious or spiritual. It’s important for Dartmouth not to make official one of those expressions, but even more important is for Dartmouth to provide opportunities for that expression.” 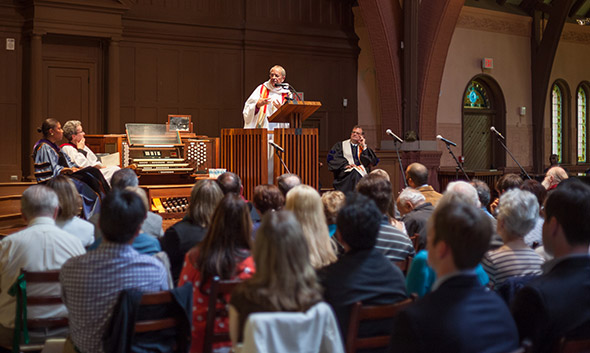 The Rt. Rev. V. Gene Robinson, Ninth Bishop of the Episcopal Diocese of New Hampshire (retired) addressed the Class of 2013 and their families and friends gathered in Rollins Chapel for Baccalaureate 2013. (Photo by Corinne Arndt Girouard)

Dartmouth’s 2013 Baccalaureate speaker the Rt. Rev. V. Gene Robinson retired as Ninth Bishop of the Episcopal Diocese of New Hampshire on January 5, 2013. Robinson was elected bishop on June 7, 2003, having served as Canon to the Ordinary (assistant to the bishop) in New Hampshire for nearly 18 years.

Robinson was invited by President Obama to give the invocation at the opening inaugural ceremonies at the Lincoln Memorial on January 18, 2009. He is the author of In the Eye of the Storm: Swept to the Center by God (Seabury Books, 2008), and God Believes in Love: Straight Talk about Gay Marriage (Alfred Knopf, 2012), and has been the subject of two feature-length documentary films.

Robinson is a senior fellow at the Center for America Progress, a progressive think tank in Washington, D.C., where he writes and speaks on a variety of issues facing the nation. He is also “bishop in residence” at St. Thomas Episcopal Church in Washington, D.C.

During his visit to Dartmouth, Robinson also attended a screening and discussion of the documentary of Love Free or Die, about Robinson, sponsored by the Department of Religion, and a reception with students and members of the United Campus Ministers.

Dartmouth’s Baccalaureate, as the service program notes, looks to recognize “both the protestant Christian tradition of the college’s founding, and the multi-faith richness of its contemporary life.”

Dartmouth’s Commencement ceremonies and the nature of Baccalaureate itself have evolved over the years—a fact noted by Steven Shapiro, father of Ariel Shapiro ’13, who expressed his gratitude for not being asked to offer his parental reflections in Latin. Ariel Shapiro, a history (modified with economics) major from Hampton, N.H., served as student director of religious and spiritual life at the Tucker Foundation.

Dawood Yasin, Dartmouth’s Muslim advisor, opened the service with prayer, and students with connections to groups including Chabad at Dartmouth, Native Americans at Dartmouth, the Zen Practice Group, and the Morning Glory Community Fellowship read during the service.

Racquel Bernard  ’13, an African and African American studies major from Auburndale, Fla., and a Christian, read a passage from the Gospel of Luke. A member of the Gospel Choir, Bernard said she was thrilled to be able to sing with the group at her own Baccalaureate and “to speak in that atmosphere of many faiths coming together.” The service affirmed her belief that “we can have unity and harmony.”

Robinson’s address, “Get into Some Gospel Trouble,” drew parallels from the passage read by Bernard and the graduates’ moment at the brink of post-college life. Jesus, Robinson recounted, had just been recognized as “beloved of God,” tempted in the wilderness, and was now launching his public ministry, facing the question of how to live his life. The choices Jesus made, Robinson noted, both committed him to being on the side of the marginalized and to getting in trouble with the religious and social powers-that-be of his time.

Robinson left the graduates with three questions: How will you use the gifts you have been given? What will be your “inaugural speech?” And how will you get into “gospel trouble” for the common good? He challenged the Class of 2013 not only to engage in good works—to rescue the troubled—but also to track down and combat the systemic injustice that puts people at risk to begin with. 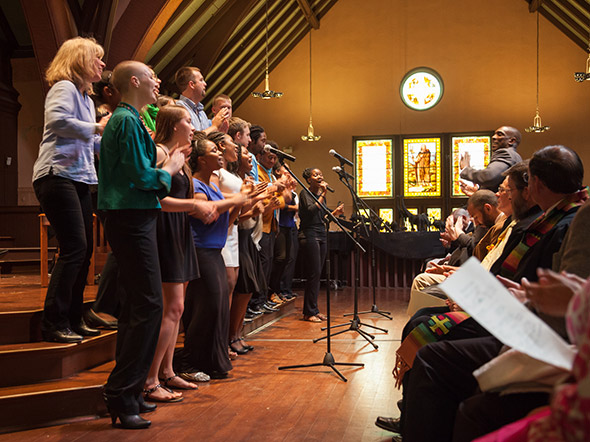 Crocker, who retires from Dartmouth on June 30, closed the service, borrowing the words of a hymn as his benediction:

Now thank we all our God, with heart and hands and voices, Who wondrous things has done, in Whom this world rejoices; Who from our mothers’ arms has blessed us on our way With countless gifts of love, and still is ours today.

Oh, may this bounteous God through all our life be near us, With ever joyful hearts and blessed peace to cheer us; And keep us in His grace, and guide us when perplexed; And guard us through all ills, in this world and the next.

Parnian Parvin-Nejad ’13, a biological sciences major from Shrewsbury, Mass., and a Muslim, led the procession of United Campus Ministers religious in and out of the chapel. Baccalaureate, she said, gave her “a lot to think about, inspiring things to put into practice in my life.” The Rev. Eleazar Wheelock and the Rev. Samson Occom—two clergymen central to Dartmouth’s founding—might well be pleased by that.
Written by
Kelly Sundberg Seaman
Share this
FacebookTwitterEmail
Quoted
Quote