Can Maps Teach Us About Writing?

Can creating a map help a student navigate the twists and turns of writing an essay? Dartmouth’s Mark Koch thinks it can. 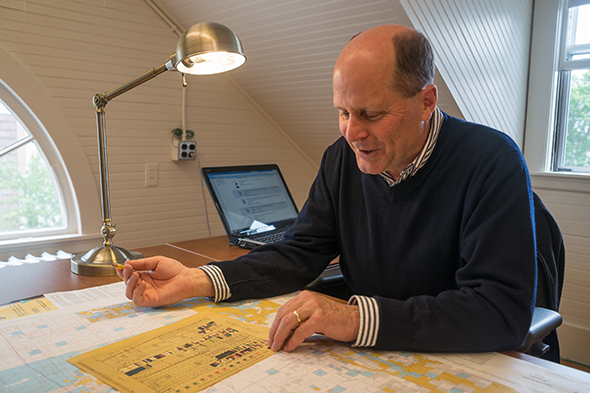 Analyzing maps shows students “that arguments can be created outside of sentences and paragraphs,” says Mark Koch, a lecturer in writing. (Photo by Eli Burakian ’00)

In Koch’s first-year writing course, he uses an unusual medium to teach students how to conduct research, create arguments, and think critically. Students in Koch’s course learn how to analyze maps just as they would read texts, exploring what the map writer’s motives were, what is emphasized in the map, and what was omitted.

“Everyone who composes a map makes an argument, with regards to what is included in the map and what is not,” says Koch, a lecturer at the Institute for Writing and Rhetoric.

Students can find writing and analyzing texts intimidating, he says. And while they encounter maps every day—“to find a building on campus or to read directions to a party,” Koch says—they don’t always read them as a written text, with complex meanings and constructions.

Early in the course, Koch asks students to look deeply at a variety of maps, such as a trail map of Killington Ski Resort, a map of Hanover or a map used by early American explorers. Students then write a response to the map as if it were an article or a short story, analyzing what can be inferred from the map, including what is learned about the cartographer.

“Every map that we looked at had some bias,” says James Verhagen ’16, who took Koch’s course this year. “It taught me that even when you think maps are objectively laying out the facts, there is some subjectivity to it.”

Later in the course, groups of students are asked to create their own maps and express an argument from the data it presents. Groups create a map on a topic of their choosing, and write an accompanying abstract explaining their argument.

“They have to explain the significance of what their map means,” says Koch. “Students are finding data and creating an argument, but I think it gets them to think critically and gets them to think differently. It shows them that arguments can be created outside of sentences and paragraphs.”

Some examples include a group of students who charted where Ivy League lacrosse players went to high school. Another group’s map displayed the undergraduate institutions of current U.S. senators. One group mapped the location of the top 10 cocoa producing countries and the 10 countries with the highest chocolate consumption. Countries like the Ivory Coast, Ghana, and Indonesia led the world in production, while Germany, Switzerland, and the United Kingdom were the top chocolate consumers.

“Creating a map taught me that details are very important when it comes to writing. I learned that the more developed the country, the more likely the country does not produce cocoa,” says Mary O’Connell ’16.

One could argue that the chocolate and cocoa map supports the idea that there is a socioeconomic divide between the northern and southern hemispheres. After all, chocolate is considered a luxury item, and the student’s map generally shows that poorer countries produce cocoa, and wealthier countries consume chocolate. On the other hand, chocolate can melt in warmer climates, Koch says, and that may explain why it is more widely consumed in northern countries.

All of these questions get the students to think critically.

“Creating a map and linking it to the writing process made me think about the argument that you are trying to put forward with a paper,” says Verhagen, who worked on the cocoa production and chocolate consumption map. “I found the most beneficial aspect of the course to be, once we had found the topic we wanted to discuss, deciding how to go about displaying that in order to create the effect we wanted.”

“The skills that made good maps made good writing, and it was neat to see the students start to trust that process and finally understand it,” says Chris Abell, MALS ’13, who served as Koch’s teaching assistant.

Ideally, Koch says, students gain a better idea of how to conduct research, analyze the value and biases of sources, and create an argument in writing.

“By the end of the course, students don’t assume as much,” he says. “They are more careful about the data they use to support their arguments, and what kind of source that data comes from.”