Dartmouth bid adieu to the Class of 2013 with Commencement ceremonies on Sunday, June 9, the culmination of a full weekend of events. Geoffrey Canada, president and chief executive officer of Harlem Children’s Zone, Inc., gave the Commencement address. Find more information about the 2013 Commencement at the official website. 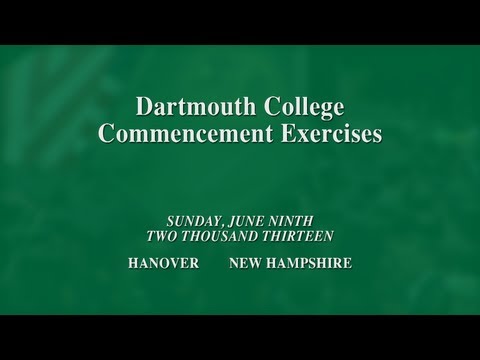 Student Marshals are chosen by their classmates for their integrity, enthusiasm, and other traits.

Dartmouth Now Profiles Members of the Class of 2013

As the Class of 2013 bids farewell, Dartmouth Now profiles some of the College’s newest graduates, including future journalists, health care providers, and economists.

Two Graduates to Work for Canada at Harlem Children’s Zone

Zoe Kopp ’13 and Kate Kranenburg ’13 will work next year for the nonprofit organization.