“It’s a little wild. I’m really not the best at alley docking,” she says, referring to the maneuver of reversing down a side street. 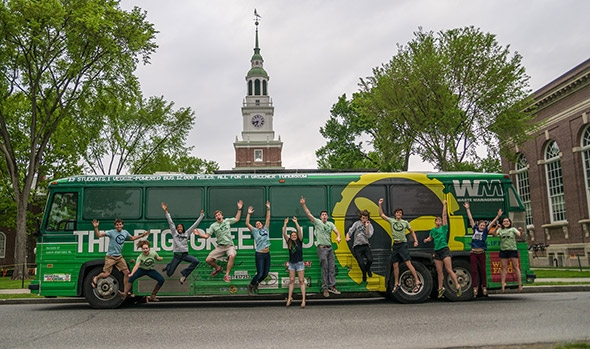 Daigler, who earned her commercial driver’s license last month, isn’t climbing behind the wheel of just any bus, though.

Daigler is one of the student crew members piloting Dartmouth’s Big Green Bus on its annual trek across the country. Twelve Dartmouth students will make their summer home on board a rebuilt, environmentally friendly Greyhound bus as they travel more than 10,000 miles promoting sustainability and learning about green-energy techniques being implemented around the nation.

As they barnstorm through towns and cities across the United States, the crew will use the bus as a talking point. The group will participate in a number of events, helping to build community gardens, meeting with companies hoping to optimize sustainability efforts, and talking with elementary students about being green.

During past trips, crew members worked to educate people about sustainability; this year the crew hopes to inspire people to act on behalf of the environment. Gray Kelsey ’13, a crew member who majored in studio art, calls the group “the inspiration crew.”

Another change: This year the students will visit fewer cities and spend more time at each stop. In years past, the bus visited as many cities as possible for a day or two; this year they will spend up to four days in some cities, in an effort to reach more people and get a better sense of the distinct issues facing each community.

“We really asked ourselves this year, ‘What ways can we be most effective in each place?’ ” says Daigler, an engineering and environmental studies double major.

The group expects to have events in 26 locations, in places like Chicago, Las Vegas, Seattle, and many smaller towns. Planning for the trip, which is run entirely by students, started in October. Crew members have designated duties—from raising funds to managing public relations to overseeing logistics. Because the bus runs on biodiesel, the crew members map out the places where they’ll stop to refuel. They also have to build in extra time; in a motor coach there are fewer places to stop, park, and even eat, and with a speedometer that doesn’t go past 80 m.p.h., “everything moves slowly on the bus,” says Daigler.

Daigler, the only crew member who has made the journey before, says there are inevitable bumps in the road—bottoming out on a hill in San Francisco and getting pulled over at 3 a.m. in South Dakota are two obstacles she recalls.

“Nothing ever goes completely right,” Daigler says with a smile. “That’s what makes it exciting. It’s a roller coaster of emotions.”

This year’s roller coaster started June 13 and runs through August 31. 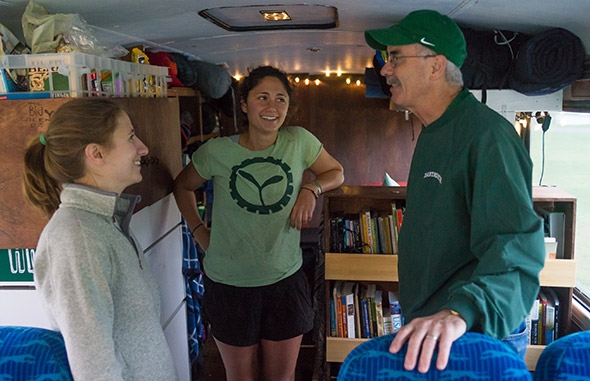 While crew members will do plenty of talking about sustainability, they will spend much of their time listening, too.

In Denver, the students will tour the National Renewable Energy Laboratory, and in New York they hope to visit a drilling site to see the effects of “fracking,” a controversial hydraulic-fracturing method of extracting oil and gas. They will help clean up urban farms along the route and meet with coal miners in West Virginia as they learn about grassroots sustainability efforts.

“We want to be able to understand the circumstances that make it difficult to act sustainably in the places we are visiting,” says Kelsey.

The crew hopes to strike the right chord with the audiences at their events, Daigler says.

“Sustainability can be a very alienating topic,” she says, noting that the movement is often associated with the wealthy. “We believe it shouldn’t be an exclusive movement. Climate change affects people across classes.”

“I can’t wait to get out there and talk to people and get a sense of what they’re doing to change the world,” says Kastrinsky.

In addition to learning about sustainability, Daigler says, crewmembers gain insight about the different cultures, landscapes, and histories of the places they visit.

“The bus is an amazing learning experience in ways you would never expect,” she says.

“I’m definitely looking forward to getting a more complete perspective on the environmental issues across the U.S.,” says Kelsey. 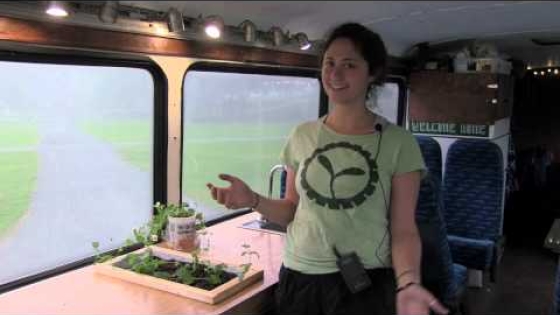 On Board the Big Green Bus

Inside the bus, many of the original Greyhound seats have been removed to create common areas, complete with couches, tables, and a refrigerator. The seats that remain have been reconfigured to face each other. Each crewmember gets a small cubby to keep some personal items. Several bookshelves are stacked high with titles like The Complete Idiot’s Guide to Green Careers, The Omnivore’s Dilemma, and Ecodefense: A Field Guide to Monkeywrenching. One countertop has a built-in flowerbox—“I want to plant basil,” says Daigler.

In the rear of the bus, there is a bed—reserved for the five drivers to take naps—but the crew won’t drive through the night unless they’re in a pinch. Rather, they camp out, sleep in hotels provided by their sponsors, or stay in the homes of Dartmouth alumni. Sidney Goldman ’60 of Key West, Fla., will host the group for four nights in early July, and says he is looking forward to providing a “needed rest stop for a road-weary crew.”

“The importance of the Big Green Bus to me is twofold,” says Goldman. “First, it brings support of a sustainable environment to the public at large and especially here in the Florida Keys which are so wonderful yet so fragile. Second, the bus brings awareness of Dartmouth College’s strengths and diversity to the student population here in the Florida Keys.”

The current bus, the fourth to be used, is a 1989 model and mysteriously does not have an odometer. “My guess is two million miles,” says crew member Ariana Sopher ’14. While there is no way to tell the mileage, the bus has many other conspicuous features.

The Big Green Bus has been outfitted with numerous green fixtures, including solar panels on the roof, which power the bus’s lighting and electrical appliances. The bus has tabletops made of recycled glass and concrete, and the refrigerator is one of the most energy efficient on the market.

In previous years, the bus used a combination of waste vegetable oil and biodiesel fuel. This year it will be powered solely by biodiesel fuel, Kastrinsky says, because biodiesel causes fewer engine problems and is more likely to become a widespread practice than vegetable oil. The current motor coach debuted as the Big Green Bus in 2011, which was also Daigler’s first trip.

“The trip kick started my passion for the environment,” says Daigler. “You have 12 weeks, a bunch of money, and a bus, and you go out and try to make a tangible and positive difference.”

“I feel like it’s going to be a tremendous educational experience,” says Kastrinsky. “All summer I’m going to be learning.”

To see their route and keep up with the crew’s travels, visit the Big Green Bus website.